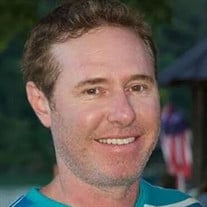 Arthur Douglas Morris, 53, unexpectedly passed away on March 7, 2022 after suffering an aortic dissection. He joins his father, Art Morris; his grandparents James and Mary Elaine Morris; his grandmother, Mary Lorena Long; his grandfather Jack Butler; his uncle David Butler; and his uncle Jeffrey Jones in the Kingdom of Heaven. Doug was born in Miami, Florida and moved to Key West with his family when he was four years old. He attended public schools and graduated from Key West High School in 1987. He graduated from Florida State University with a bachelor’s degree in Criminal Justice. He played Little League Baseball his entire boyhood, which his Dad coached him through the leagues at the Peter Dopp Fields. He was on the tennis team at KWHS team during his high school years. He was an active participant during his childhood and youth at Peace Covenant Presbyterian Church. Doug was a kind, giving, funny and eccentric soul, who was like no other. He was definitely “one of a kind”! He was a fun loving dad and uncle who was dearly loved by all the children in our family. Doug was the oldest sibling and cousin who was the “leader of the pack”. Summers were filled with motorcycles, bad-mitten, billiards, ping-pong, poker, every water sport imaginable, tag, fireworks, and campfire s’mores at our summer house on Lake Nottely. Doug was dearly loved by those he leaves behind: his mother, Beverly Morris of Key West; his brother, Bradley Morris (Diane) of Tallahassee; his sister Katie Morris Catena (Jon) of Key West; his precious children James Douglas and Camryn Morris of Tallahassee; his cousin Paul Kramer (Tessa) and their children: Cody, Teddy and Kari of Tampa; his aunt Barbara Kramer of Tampa; his aunt Kathy Jones of Atlanta; his uncle James Joseph Morris of Blairsville; his former wife, cherished friend, and mother of his children Quia Atkinson (Morgan) of Tallahassee; His nieces and nephews; Molly Kate and Brody Arthur Catena of Key West; Andrew, Nathan, Maddy Beth, and Josie Morris of Tallahassee; who all called him the “fun uncle”. There are so many cousins and friends who were a part of Doug’s life that will miss and remember him. Our hearts are in pieces but together, our love for Doug and one another will guide us through our upcoming days. The family thanks Bobby Highsmith, devoted friend and part of our family, for everything he has done for us, guiding and counselling, through the good times and the difficult challenges. A family service will be held at their summer house, Legacy Point, in the summer. Doug’s cremains will be placed at the family burial plot at Union Memory Gardens in Blairsville, Georgia. The last text Doug sent his mom was, “The responsibility that man has to be respectful of all others, no matter race, income status, political or religious beliefs, as we, as humans, are all cut from the same mold.” Be kind to one another. Peace, Dougie

The family of Arthur Douglas Morris created this Life Tributes page to make it easy to share your memories.

Send flowers to the Morris family.