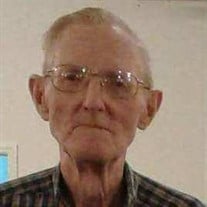 Avin Thomas Ezell, 83, of Thomasville, Georgia, passed away on Saturday, February 10, 2018, from injuries sustained in a car accident on January 19, 2018. He was surrounded by his loving family as he crossed over into the gates of Heaven. Born May 25, 1934, in Whigham, Georgia, he was a son of the late Johnnie Wilburn Ezell and Nellie Elizabeth Smith Ezell. He married Ruby Mildred Cloud, of Bainbridge, on August 25, 1962. For almost 44 years, he worked for the Thomasville Times-Enterprise, as a Page Composer, where his coworkers gave him the nickname “Easy”. Following his retirement in June 1999, he went to work part time driving cars for various car dealerships including Prestige Honda and Nissan, Mitchell County Ford and Price Point. He was a longtime member and deacon at Trinity Baptist Church and also belonged to the Hardees Coffee Cup Club. He is survived by his wife, Mildred Cloud Ezell, of Thomasville, who lovingly cared for him during his final days; sons, Thomas D. Ezell, of Whigham and Rocky L. Ezell (wife, Guadalupe), of Cairo; granddaughters, Noemi, of Mexico and Anahi of Cairo; great-grandson, Josue Ezequiel, of Mexico; sister, Shelby Ezell Harrison, of Whigham; as well as numerous nieces, nephews, cousins and countless friends and acquaintances that he made throughout the years. In addition to his parents, he is preceded in death by a daughter, Susan Elaine Ezell; sisters, Carolyn Ezell, Becky Ezell Huneycutt and Laharon Ezell Griffin; and brothers, DeVaughn Ezell, Douglas Ezell, Durwood Ezell and Harry Ezell. Funeral services will be held at 3:00 PM, Thursday, February 15, 2018, at Whiddon-Shiver Funeral Home. Interment will follow at Laurel Hill Cemetery. The family will receive friends from 5:30 until 7:30 PM, Wednesday, February 14, 2018, at Whiddon-Shiver Funeral Home. Flowers are being accepted or memorial donations may be made to First Option Care, Post Office Box 7102, Thomasville, Georgia 31758. Online condolences may be expressed to the family at www.whiddonshiverfuneralhome.com or www.abbeyfh.com.

Avin Thomas Ezell, 83, of Thomasville, Georgia, passed away on Saturday, February 10, 2018, from injuries sustained in a car accident on January 19, 2018. He was surrounded by his loving family as he crossed over into the gates of Heaven. Born... View Obituary & Service Information

The family of Mr. Avin Thomas Ezell created this Life Tributes page to make it easy to share your memories.

Avin Thomas Ezell, 83, of Thomasville, Georgia, passed away on...

Send flowers to the Ezell family.