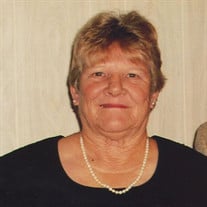 Barbara Lamb Brown, 78, of Crawfordville, Florida, passed away peacefully on Wednesday, July 14, 2021, at Encompass Health and Rehab. Born in Daleville, Alabama on April 2, 1943, she was a daughter of the late Thomas and Ethel Mae Carter Lamb.... View Obituary & Service Information

The family of Mrs. Barbara Lamb Brown created this Life Tributes page to make it easy to share your memories.

Send flowers to the Brown family.