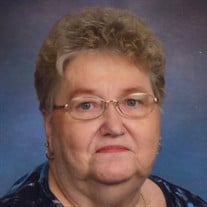 Barbara Ann “Nana” Allen Smith went to be with her Lord and Savior on Tuesday, January 16, 2018, at the age of 77. Barbara was born on June 23, 1940, in Tallahassee, to the late Floyd M. Allen, Sr. and Oneida B. Allen. She graduated in 1958 from Florida High School. She married her high school sweetheart George Edward “Ed” in 1958, and he preceded her in death in 2011. She worked at the Florida Legislature and the Department of Education where she retired after 25 years. They had four children, Eddie (deceased), Ron (Susan), Rick (Michelle) and Diane Barrett (Shawn); grandchildren, Josh Smith, Jeremy Smith, Justin Smith, Steven Smith, Casey Smith, Taylor Smith, Ashley Smith, Aaron Merkel and Leann Besczezynski; great-grandchildren, Joshua Terry Smith, Kaitlyn Smith, Jackson Smith, Braydon Smith and Lennox Merkel; and a brother, F. M. Allen (Carlene); and many nieces and nephews. She is also survived by her dog, Macy, who was always by her side. Visitation is from 5:30 until 7:00 PM, Friday, January 19, 2018, at Abbey Funeral Home. The funeral is 10:30 AM, Saturday, January 20, 2018, at Abbey Funeral Home, with interment following at Tallahassee Memory Gardens by her beloved husband Ed, the love of her life. In lieu of flowers, donations may be made to the American Heart Association. Online condolences may be expressed at www.abbeyfh.com. Ed told her that when it was her time to come, he would be standing at the Pearly Gates with her Lord and Savior Jesus to welcome her home.

The family of Mrs. Barbara Ann Smith created this Life Tributes page to make it easy to share your memories.

Barbara Ann “Nana” Allen Smith went to be with her Lord and Savior...