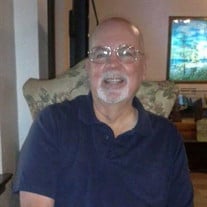 Benjamin Franklin Smith, Jr., 69, of Monticello, Florida, passed away surrounded by his loving family on Wednesday, August 9, 2017, in Tallahassee. A son of the late Benjamin F. Smith and Frances Richardson Smith, he was born on November 9, 1947, in Tallahassee. He is also preceded in death by his brother, Mitchell B. Smith. He served in the National Guard for many years and was also a sales representative for electrical and lighting supplies. Ben loved his family and friends, FSU football, genealogy, history and had a special place in his heart for St. Augustine. Ben enjoyed browsing through beautiful antique stores. He was a music lover and liked Katie Melua, Nora Jones and Sarah Brightman. He especially loved Barnaby's pizza and was an avid bowler in his younger days. He taught his children how to throw a football, how to catch fish, and shoot a bow and arrow. Ben also enjoyed taking his daughters hunting for shark’s teeth before they could even walk. He was intelligent and told corny jokes that sometimes only he laughed at. He never met a stranger and always had a good story to tell. Ben loved to talk and we can only imagine the conversations he is having now. He will be missed dearly by all his family and friends but we know he is at peace. Until we meet again. Ben is survived by his daughters, Melanie D. Piland, Angela S. McKenzie (husband, Vince) and his son, Shane Smith; granddaughters, Shelby Piland and Jessica Pichard (husband, Justin); sister, Pat Smith Winchester (husband, Dick); as well as many nieces, nephews, cousins and friends. His life will be celebrated at 2:00 PM, Sunday, August 13, 2017, at Abbey Funeral Home. Online condolences may be expressed at www.abbeyfh.com.

Benjamin Franklin Smith, Jr., 69, of Monticello, Florida, passed away surrounded by his loving family on Wednesday, August 9, 2017, in Tallahassee. A son of the late Benjamin F. Smith and Frances Richardson Smith, he was born on November 9,... View Obituary & Service Information

The family of Mr. Benjamin Franklin Smith Jr. created this Life Tributes page to make it easy to share your memories.