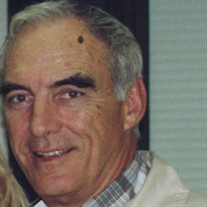 Bubba Seay 91, passed away peacefully at home on Sunday, May 9, 2021, surrounded by his wife, Marilyn of 21 years and his son, Ken. Bubba was born in Geneva, Alabama on January 25, 1930 to Marion and Elizabeth Seay from Arlington, Alabama. Bubba graduated from Arlington High School and at 6’4” played basketball. At an early age Bubba enjoyed working on cars and found part time jobs after school improving his skills. He was drafted into the Army soon after graduation to fight in the Korean War. Bubba moved up in rank and was eventually promoted to Tank Commander. Bubba was honorably discharged in 1956 and served in the Army Reserve for four additional years. He returned to his hometown and eventually made his way to Tallahassee where he opened his own business, a garage and gas station. He transitioned and diversified his business and added cars for sale. As his business grew, Bubba invested in commercial real estate in Tallahassee and found great success as an entrepreneur. Although, Bubba's greatest gift of all was his kindness to those he ever met. Bubba enjoyed fishing, golfing and had a keen eye and understanding for blackjack and poker. He essentially made enough money to make a living wage in retirement. Bubba was preceded in death by his father and mother, Marion and Elizabeth Seay; and his brothers Robert and John Seay. He is survived by his wife of 21 years, Marilyn Parcels-Seay; his son, Ken Seay (Barb); his granddaughters, Roxanne Seay and Natalie Seay (Kaleb); his sons, Scott, and Eric Parcels; his daughter, Patricia Davis; and granddaughters, Koby and Taylor; his nephews, Bob Seay (Alicia) and Jimmy Seay; his niece, Caroline Seay; his nephews, Mark Seay (Abra) and Matt Seay (Jaime); niece, Grace Peres (Terry) and Jennifer Bennett (Randy). In lieu of flowers, memorial donations may be made to Big Bend Hospice or to the charity of your choice. Online condolences may be made at www.abbeyfh.com.

Bubba Seay 91, passed away peacefully at home on Sunday, May 9, 2021, surrounded by his wife, Marilyn of 21 years and his son, Ken. Bubba was born in Geneva, Alabama on January 25, 1930 to Marion and Elizabeth Seay from Arlington, Alabama. Bubba... View Obituary & Service Information

The family of Mr. Bubba Seay created this Life Tributes page to make it easy to share your memories.

Bubba Seay 91, passed away peacefully at home on Sunday, May...

Send flowers to the Seay family.