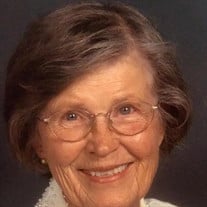 Camille H. DeLopez, 90, peacefully passed through the gates of Heaven and met her Lord and Savior on Tuesday, March 21, 2017. Her son Richard, who lovingly cared for her the last eighteen months of her life, was by her side. A daughter of the late Fordinan and Rebecca Lawton Holsomback, Camille was born September 5, 1926, in Loco (a small town in Lincoln County), Georgia. She grew up in the country, and as a teenager moved to Atlanta where she graduated with honors from West Fulton High School. After graduation, she worked as a switchboard operator for Bell Telephone. She met her future husband, Carlos DeLopez, at a USO dance in Atlanta during World War II. They married in Marietta, Georgia in 1944, and settled in Atlanta. After their two sons were born, the family moved to Hialeah, Florida, where Camille worked more than twenty years as a bookkeeper at Hialeah Racetrack. After their retirement, Camille and Carlos moved to Tallahassee in 1984. They were active, faithful and longtime members in their church, Fellowship Baptist Church. Camille taught Sunday school and Bible study classes for over sixty years. She was a devout Christian, committed to God and reading the Bible daily. Camille was always kind and gracious with everyone she met. Her passions were baking, cooking, sewing and making quilts for family and friends. She always cherished her many dogs, especially Scooter, raising poodles, Chihuahuas and rescuing a number of dogs who became healthy and lived many happy years under her loving care. While in Tallahassee, she and Carlos enjoyed many years in their gardens. Left behind to cherish her memory are her sons, Tom DeLopez (Sandy) of Tallahassee, and Rick DeLopez (Regina) of Boca Raton; her nieces, Debbie Latsbaugh of Cocoa, and Marissa Richards of Tallahassee; and several great nieces and nephews. She is also survived by many friends who she dearly loved. Preceding her in death are her parents, Fordinan and Rebecca Holsomback; her husband, Carlos DeLopez; and her sister, Grace Latsbaugh. A service to honor and commemorate her life is 11:00 AM, Friday, March 24, 2017 at Abbey Funeral Home, with interment following in Tallahassee Memory Gardens. The family will receive friends from 5:00 until 7:00 PM, Thursday, March 23, 2017, at Abbey Funeral Home. Flowers are being accepted, or memorial donations in Camille’s name may be made to Big Bend Hospice. Online condolences may be expressed at www.abbeyfh.com.

Camille H. DeLopez, 90, peacefully passed through the gates of Heaven and met her Lord and Savior on Tuesday, March 21, 2017. Her son Richard, who lovingly cared for her the last eighteen months of her life, was by her side. A daughter of... View Obituary & Service Information

The family of Mrs. Camille Holsomback DeLopez created this Life Tributes page to make it easy to share your memories.

Camille H. DeLopez, 90, peacefully passed through the gates of...

Send flowers to the DeLopez family.