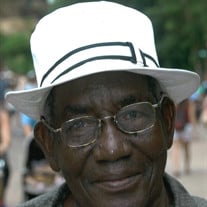 Cedoius Occeus was born in 1935 on La Gonave, an island just off the coast from Port-au-Prince. As a child his family moved to St. Marks on the mainland, where he lived with his parents and his brother and sister until l957. His father was a farmer; his mother had an oven, a large brick wood- burning outdoor oven in which she baked bread for the surrounding neighbors. who did not have ovens. She would be paid by the neighbors for the use of her oven. Cedoius attended school in St. Marks through primary school and began working in carpentry at the age of l4 or l5. This was his occupation throughout his life—making furniture and as a framer of houses. As a youngster he liked to play futbol (soccer). He rode a bicycle around the village. At that time there were few vehicles in Haiti, but he remembers that he could take a train that went from St. Marks to Port-au-Prince. Small villages were somewhat isolated from political turmoil, but early on everyone including children knew not to speak out against those in power. In l957 he moved to La Gonave where he continued with his carpentry and it was there he met his wife. They had l0 children—six boys and four girls. Four of them are still living in Haiti, and one is in France. In St. Marks he attended the Catholic church. When he moved to La Gonave he became a member of the Nazarene Church, and his family was raised in that church. He is an avid reader of the Bible and loves to sing hymns. Haiti is a beautiful country but plagued with political turmoil, ecological destruction, and natural disasters. The disaster that most changed Cedoius’ family came in 1986. The village was located between two mountains and during a torrential rain a mudslide destroyed most of the houses in their village including theirs. They lost everything. He tells about waking up during the night to some noise and being surprised when he stepped into the water that was above his ankle. Cedoius stayed on La Gonave to continue working to support his family. Several years later Phil Anderson came to Haiti with Church World Service, teaching furniture making in a vocational school. Cedious’ daughter Raymonde met and married Phil Anderson. It was through them that he came to attend our Meeting. Raymonde and Phil have a daughter, Sabrina, and a son, Aurelio. They came to the U.S. when Aurelio was six months old. In 2006, Cedouis and his wife, Anna, came to the Tallahassee to be with Raymonde and Phil. They would visit family in Haiti from time to time and were in Haiti when the earthquake of January 12, 2010 occurred—another life changing event. When it struck, they were in their home on La Gonave. They could see the village on the beach below. When the earthquake hit, the ocean receded and exposed many fish. The people ran out to collect the fish. But some of the elders in the village told them to come back. They said they had never seen this before, and it could not be a good thing. The people came back and climbed the hill above the village before the water came in and entered the village, but it did not destroy the houses. For a long time after the earthquake Anna was not able to get medicine she needed and suffered a severe stroke as a result. She was unable to speak and walk. She passed away one year after the earthquake. Raymonde and Cedoius and all her children attended the funeral. She was buried in an above-ground vault that Cedoius constructed near their home on the hill. He peacefully passed away on January 1, 2016, at the Big Bend Hospice House. Survivors who now cherish his memory include daughters, Raymonde Anderson, Nicole Occeus, Elna Occeus, Ceda Occeus; sons, Mika Occeus, Mattheus Occeus, Akiche Occeus, Othniel Occeus, Michelet Occeus and Elias Occeus. He is also survived by thirty-one grandchildren and numerous great-grandchildren. Funeral services are 11:00 AM Friday, September 8, 2016 at Abbey Funeral Home, with entombment to follow in Tallahassee Memory Gardens. The family will be receiving friends from 5:30 until 7:00 PM, Thursday, September 7, 2016 at the funeral home. Expressions of sympathy may be expressed at www.abbeyfh.com.

Cedoius Occeus was born in 1935 on La Gonave, an island just off the coast from Port-au-Prince. As a child his family moved to St. Marks on the mainland, where he lived with his parents and his brother and sister until l957. His father was a... View Obituary & Service Information

The family of Mr. Cedoius Occeus created this Life Tributes page to make it easy to share your memories.

Send flowers to the Occeus family.