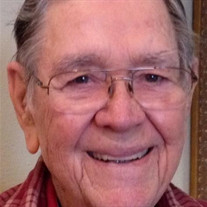 Charles Denmark Johnson, 92, peacefully passed away Thursday, January 14, 2016 at Providence Hospital in Mobile, Alabama. A celebration of his life will be held at St. Louis Catholic Church on Saturday, February 6, 2016 at 2:00pm, with an inurnment at Tallahassee Memory Gardens. Flowers or arrangements are being accepted or a memorial contribution may be made to the American Diabetes Association. Charles was born July 24, 1923, in Pavo, Georgia, the son of Robert E. Johnson and Isabelle Mott Johnson. He graduated from Miami Edison High School and joined the Navy, proudly serving 4 years during World War II. He continued his education and graduated from the University of Florida. After graduation, he joined the Federal Bureau of Investigation. He was a special agent and supervisor for 27 years, receiving many commendations (1951-1978). After retiring from the FBI, Charles became an arson investigator for the Insurance Crime Prevention Institute. He was survived by his wife of 39 years, Mary Mims Johnson of Tallahassee, Florida and his children Curtis Robert Johnson of Jacksonville, Florida, Mary Kathleen Dunn of Jasper, Georgia, Karen Anne Esbensen (Eric) of Theodore, Alabama and Kent Edward Johnson (Deana) of Tallahassee, Florida. He spent his later years enjoying his time with family and grandchildren, Christopher Gainey, George Grover, Jane M. Johnson, Tyler Dunn, Hannah Dunn, Nathan Esbensen, Emily Esbensen and great grandchildren Andrew and Tyrian Gainey, as well as many nieces, nephews and other relatives. He was preceded in death by his son Christopher Charles Johnson.

Charles Denmark Johnson, 92, peacefully passed away Thursday, January 14, 2016 at Providence Hospital in Mobile, Alabama. A celebration of his life will be held at St. Louis Catholic Church on Saturday, February 6, 2016 at 2:00pm, with an... View Obituary & Service Information

The family of Mr. Charles Denmark Johnson created this Life Tributes page to make it easy to share your memories.

Send flowers to the Johnson family.