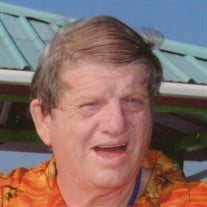 Clarence “Hank” Kenneth Snell, 67, of Tallahassee, passed away January 26, 2016. He was born in Meadville, Pennsylvania, on October 27, 1948. He faithfully served in the US Army during the Vietnam War, and enjoyed scratch offs, tinkering, gardening and landscaping. Survivors include his wife of 20 years, Barbara Snell; a brother, Graylin Snell; and his extended family, including Debi Thomas, Liz Simental, Doug “Hud” DeFend and Mathew McLendon. He was preceded in death by his parents and a sister, Patty Scasbrick. A memorial service is 1:00 PM, Saturday, January 30, 2016, at Abbey Funeral Home. The family will receive friends immediately following the service. In lieu of flowers, donations may be made to either the DAV, or more specifically, the Gainesville, Florida Fisher House, 352-548-6492. Online condolences may be expressed at www.abbeyfh.com.

The family of Mr. Clarence Kenneth Snell created this Life Tributes page to make it easy to share your memories.

Send flowers to the Snell family.