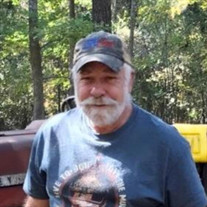 Craig Arthur France, age 62, of Mayo, passed away Saturday, December 5, 2020, while traveling through Columbia County, Florida. A son of Dr. James Arthur France (deceased) and Claire Wistuba France of Mayo, Craig was born on September 16, 1958, in Bradenton, Florida. He is survived by his daughters: Stephani Ann France and Staci Ashleigh Swain (husband, Bryan) of Tallahassee; brother James Scott France (wife, Janice) of Tallahassee; sisters Jennifer Mullins (husband, Bo) of Mayo and Ashleigh France Trimble (husband, Steve) of Tallahassee; grandson, Oliver Swain; several nieces and nephews; mentors, Jody and Joanne Sullivan of Mayo; and many close lifelong friends that were like family and meant the world to him. Craig’s family moved to Mayo, FL in 1970, where he attended and played football at Lafayette High School, graduating in 1977. He worked as a mechanic for Caterpillar in Starke, Florida then Tallahassee after moving to Woodville, Florida in the early 1980’s. Craig worked as a heavy equipment mechanic/diesel mechanic for Crowder Excavating of Tallahassee, then as an aviation mechanic at Tallahassee Regional Airport after receiving his certification from Lively Vocational/Technical School. Craig returned to Mayo and was employed as a commercial truck driver for Triple P Trucking in Mayo at the time of his death. Craig will be remembered as a man who truly took pride in living a simple life. He gave more to this world than he ever took. He was a Christian and outdoorsman whose activities included farming, camping, boating and mechanical repair. Most importantly, he was a proud father who enjoyed family time with his daughters and was delighted to become Papa to Oliver (Ollie) Swain in January, 2019. A memorial service for Craig will be held in Tallahassee at Abbey Funeral Home, 4037 North Monroe St on Saturday, December 19, 2020 at 2:00PM. Facemasks and social distancing are required. The online guestbook and live stream service can be found at www.abbeyfh.com.

The family of Mr. Craig Arthur France created this Life Tributes page to make it easy to share your memories.

Send flowers to the France family.