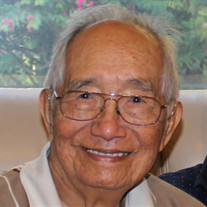 Daniel Pring Cortez, MD, 90, of Tallahassee, formerly of Fort Myers, Florida, passed into the loving embrace of Jesus on Thursday, December 6, 2018. He was born in Sexmóan, now known as Sasmuan, Pampanga Province, Philippines on March 19, 1928. His parents were Maria Pring Cortez and Angel Cortez, an itinerant Methodist minister. They lived in a remote fishing village of bamboo homes on stilts. After his mother became ill and then died without the benefit of medical care, he became determined to become a doctor. With the support of his family and the rest of his village, and despite the odds being stacked against him as a poor fisherman, he went to college and then medical school. After completion of medical school in the Philippines, he immigrated to the United States and completed his residency in General Surgery in Minneapolis, MN. During his residency, he met, fell in love with and then married Carrie Kahl, who was then working as a nurse. He later rose to become Chief of Surgery at Fairview-St. Mary’s Hospital, served as an adjunct clinical professor with the University of Minnesota Medical School and was elected to the American Academy of Surgeons. He also became an endoscopist. Throughout his career, he never forgot his underprivileged roots. He set up his practice in an impoverished area, sent assistance back home to The Philippines, and gave free medical care at a missionary training center a couple of days a week. With his wife, Carrie, he went on a number of medical mission trips overseas where they would provide free medical care to those who would not otherwise get it. After 40 years as a General Surgeon, he retired. Fishing, playing tennis and golf, watching football and any other kind of sports, enjoying good food and spending time with friends and family were some of his hobbies. Cherishing his memories and mourning his passing are his wife of 60 years, Carrie Kahl Cortez; children, Cindee Thirumalai (husband, Dave), David Cortez and Cathy Timuta (husband, Oleg); grandchildren, Alexandra Thirumalai, Kayla Cortez, Daniel Cortez, Sam Thirumalai, and Sophia Cortez. He is also survived by great-grandchild, Ellie Cortez; as well as numerous nieces, nephews, cousins and other members of his extended family. The family will receive friends from 4:30 until 5:00 PM, Wednesday, December 12, 2018, at Abbey Funeral Home, with a funeral service beginning at 5:00 PM. Online condolences may be expressed at www.abbeyfh.com.

The family of Dr. Daniel Pring Cortez created this Life Tributes page to make it easy to share your memories.

Send flowers to the Cortez family.