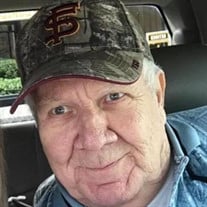 David French, 82, of Tallahassee, passed away on Friday, July 24, 2020, at Heritage HealthCare. He was born in Auburn, New York on August 20, 1937, to the Harry and Milda Jordan French. He served in the National Guard, was a printer by profession... View Obituary & Service Information

The family of Mr. David French created this Life Tributes page to make it easy to share your memories.

David French, 82, of Tallahassee, passed away on Friday, July...

Send flowers to the French family.