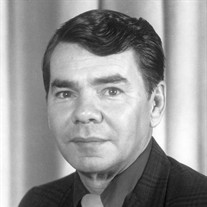 Dawson Marshall Copeland, 91, was born January 18, 1926, in Madison, Indiana and died March 28, 2017, in Tallahassee, Florida. During his life, he served in the U.S. Navy during World War II, became a structural engineer and owned his own consulting business. His life was defined by family and his work. Dawson grew up in Indiana and graduated from North Madison High School in 1944. Immediately upon graduation he enlisted in the Navy and reached the rank of Radarman Third Class. He served on a minesweeper in the Pacific at the end of the war receiving the Asiatic Pacific Star and was honorably discharged on July 6, 1946. He graduated from the University of Cincinnati with a Bachelor’s degree in Engineering in 1951. His love of engineering began as a boy while helping his father survey. During one of his summer internships, he found himself in DeFuniak Springs, Florida, where he met Bettye Caswell. They were married on February 17, 1951, and celebrated their sixty-sixth anniversary just weeks before he passed. In 1951, Dawson began his career with J. A. Jones Construction in Nashville, Tennessee. In 1953, he moved his family to DeFuniak Springs, Florida, where he founded Copeland Construction Company and built commercial, residential and school buildings in the Okaloosa and Walton County area of Florida. After a brief stint of design work in Baton Rouge and Pensacola, Dawson relocated to Tallahassee, Florida, where, in 1968, he began the next phase of his professional career. He worked with Southern Prestressed Concrete and Everhart Construction; then in 1981, he founded Copeland Consulting Engineers, Inc. He continued to practice structural engineering through 2016 at 90 years of age. Anyone who has been to Florida State University, Florida A&M University or Tallahassee Community College has walked in the shadows of the buildings he engineered. His work includes many of the condos that dot the skyline of Panama City Beach. Numerous state and federal buildings, public schools, libraries and churches attest to his wide-ranging portfolio. His life’s work has had a great impact on the development of Tallahassee and Panama City Beach. Dawson was preceded in death by his father and mother, William W. Copeland and Helen Johann Copeland, as well as his sister, Helen Swafford (Wib). He is survived by his wife of 66 years, Bettye (Caswell) Copeland; four children, Cathy Rosenberg (Eliot), Carol Eidahl (Kyle), Carla Burns (Michael) and Mike Copeland (Lisa); nine grandchildren, (Aimee, Meredith, Daniel, Jessica, Cara, Samantha, Madison, Austin and Angelo); and six great grandchildren, (Scarlett, Merrick, Trace, Nathan, Isaac, Kaden and soon to come number seven). Visitation will be on Sunday, April 2, 2017, at 1:00 PM with a funeral to follow at 2:00 PM at Abbey Funeral Home. Interment will follow at Tallahassee Memory Gardens. Memorial donations in his memory may be made to Big Bend Hospice, Visiting Angels or to your favorite charity. Online condolences may be expressed at www.abbeyfh.com.

Dawson Marshall Copeland, 91, was born January 18, 1926, in Madison, Indiana and died March 28, 2017, in Tallahassee, Florida. During his life, he served in the U.S. Navy during World War II, became a structural engineer and owned his own consulting... View Obituary & Service Information

The family of Mr. Dawson Marshall Copeland created this Life Tributes page to make it easy to share your memories.

Send flowers to the Copeland family.