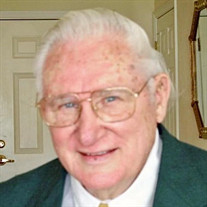 Dennis Lamar ("Buddy", "Daddy", "Pop", "Grandpa") Mansfield, 94, passed away in Tallahassee, Florida on April 15, 2022. Born on November 2, 1927, Dennis was raised in Albany, Georgia. "Buddy" grew up hunting, fishing and playing football with his "baby" brother Tommy (nearly 8 years his junior.) His senior year at Albany High he played tackle on their state championship winning football team. He attended Emory University in Atlanta, Georgia graduating with a Bachelor of Science in Chemistry and was accepted at the Emory University School of Dentistry. Unfortunately, the draft right after WWII required that he serve before attending dental school. Joining the Army, he was stationed in Tokyo, Japan and worked as a medical tech/dental assistant. His office windows faced the entrance to Allied Command headquarters and he often watched the comings and goings of General MacArthur. The windows of his own room looked down into the Imperial Palace Gardens. When he returned from Japan and was honorably discharged as a Sergeant, the massive influx of soldiers returning to civilian life at that time caused Emory dental school to postpone his guaranteed entrance for more than a year. Instead of waiting, he chose to start his career in New Orleans, Louisiana as a chemist. Dennis and Elizabeth Green met and married there in May 1958. The following year, Monsanto offered a job in research and development, and they moved to West Virginia where their only child, Anna Rebecca was born on the last day of 1959 . . . he always joked he was relieved to get the tax deduction. Throughout his career, Dennis' independent research led to the development of many unique chemical processes utilized by Monsanto and he was awarded numerous patents. He retired from Monsanto in 1992 and they moved to Tallahassee, Florida. During their marriage, Elizabeth developed severely debilitating rheumatoid arthritis and Dennis cared for her until her death in 1998. He also cared for his elderly and ailing mother for several years until her death. Additionally, he faithfully helped and supported Becky and his grandchildren. An avid fisherman and gun enthusiast, Dennis visited and fished around Carrabelle, Florida since childhood and ultimately built a second home there. He enjoyed video games, old western and war movies and "surfing the net". He was very fortunate to have found a wonderful friend and companion, Virginia, to share most of the final years of his life. He was preceded in death by parents, Iris Maureen Broxson Mansfield and Dennis E. Mansfield; wife, Elizabeth Green Mansfield; brother, Charles Thomas Mansfield; niece, Melissa Grace Culcross; and best friend Virginia D. Love. Survivors include his daughter, Rebecca Mansfield McMillan; and grandchildren, Elizabeth Campbell McMillan, MD (Armando Vazquez Ancheyta) and Zachary Mansfield McMillan; great-grandson, Sebastian Mansfield Vazquez McMillan; stepson, Miles Trenton McFann (Margaret McFann); and step-grandchildren, Matthew Trenton McFann (Margaret Hu); and daughter, Madison and Miles Todd McFann (Anthony Shumate); and son Chase; sister-in-law, Linda Plummer Mansfield; nieces and nephews, Charles Thomas Mansfield Jr., Gina Terese Mansfield, Jeremy Stephen Mansfield; seven great-grand nieces and nephews; and dear friends, Debra and Gary Cook and Sue and Henry Reed. There will be a private graveside service held at Crown Hill Cemetery, Albany, Georgia on Friday, April 22, 2022. In lieu of flowers, please make a donation to the worthy cause closest to your heart. Online condolences may be expressed at www.abbeyfh.com.

The family of Mr. Dennis L. Mansfield created this Life Tributes page to make it easy to share your memories.

Customized sympathy cards. Mailed for you.