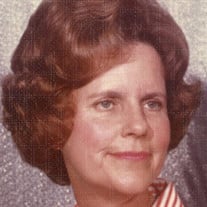 Edna Browning Gresham Lambert, 94, passed away Saturday, February 11, 2017, at her home. She was born September 25, 1922, in Crawfordville, Florida, to the late John Young Gresham and Lela Fine Gresham. Her father, brother, and grandparents were the Keepers of the St. Marks Lighthouse between 1892 and 1960. Edna grew up in a beautiful, idyllic setting with her siblings, JY (John Young), Eula, Alton, Vera, Marion, Dorothy and Laura. Edna graduated from Crawfordville High School and went to work for Citizens Oil Company and later worked for the City of Tallahassee in the Parks and Recreation Department. She later became a housewife and also ran the family rental business. She met and married Dallas Augustus Lambert, Sr., in June 1946, and they remained married 43 years until his death in 1989. She was a longtime member of Fellowship Baptist Church and had been secretary for her Sunday School Class. During her later years, Edna would ask her caregivers to drive her to the waters edge at lake Jackson where she would sit for long periods enjoying the beauty of the water and perhaps recapturing her childhood memories at the Lighthouse. Survivors include her son, Dallas A. Lambert, Jr. (Sherry Kaye); grandsons, Shea Riles Lambert (Aubrey) and Shane Young Lambert; great-grandchildren, Dallas Lambert, III, Kyleigh Young Lambert, Parker Charles Lambert, Molly Catherine Lambert, Asher Andrew Lambert and Declan Broward Lambert. A special thank you to her wonderful and Loving caregivers, Darlene Sherman, Cynthia Bowden and Linda Graham, who were very dear to Edna. The graveside service is 1:00 PM, Thursday, February 16, 2017, at Oakland Cemetery. In lieu of flowers, donations may be made to: Alzheimer’s Project of Tallahassee 301 East Tharpe Street Tallahassee, Florida 32303 Online condolences may be expressed at www.abbeyfh.com.

The family of Mrs. Edna Browning Gresham Lambert created this Life Tributes page to make it easy to share your memories.