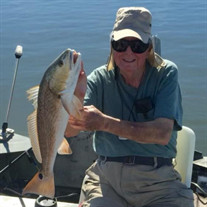 Edward Dewitt Curry, Sr., 90, of Edgewater, formerly of Tallahassee, passed away on Thursday, November 26, 2020, at the Halifax Health Hospice Care Center in Edgewater. He was born in Tallahassee on February 4, 1930, to the late Polly Ogburn... View Obituary & Service Information

The family of Mr. Edward Dewitt Curry Sr. created this Life Tributes page to make it easy to share your memories.

Send flowers to the Curry family.