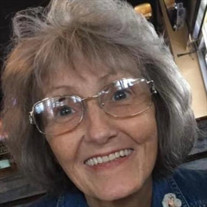 Ethel “Marie” Harmon, 73, of Tallahassee, Florida and formerly of Palmetto, Florida, passed away on October 17, 2021, after an extended illness. She was born January 6, 1948, in Ironton, Ohio to William Harrison and Helen Marie (Lewis) Akers who nick-named her “Babe.” She was a licensed cosmetologist and retired from Boston Scientific in 2010. A huge Bluegrass Music fan, she truly enjoyed “blue grassing” with friends and family. Most of all, she adored her grandchildren and great granddaughters. She was “Mom” to her only child, Janet Wilks (Carl) of Tallahassee, Florida; and “Maw” to her grandson, Jeffrey Wood (Amber) of Hilliard, Florida; granddaughter, Amanda Wood of Port Charlotte, Florida; and great-granddaughters, Nicole Wood, Lilith Wood and Raelynn Gainer. In addition to her daughter, son-in-law, grandchildren and great-grandchildren, she is survived by her sisters: Sylvia Buess (Reynoldsburg, Ohio), Fannie Jane Watkins (Branford, Florida), America Moore (Pedro, Ohio) and Kathleen Middleton and her husband, Elwood (South Webster, Ohio); as well as many nieces and nephews who called her “Aunt Babe.” Many extended friends and family in Manatee County, Florida, which she called home, also affectionately called her “Maw.” She was predeceased by her great-granddaughter, Abriyona Davis; her parents; and her three brothers, LeRoy Akers, Jack Akers and Johnny Akers, of Ohio. At her request, there will be no formal services. Online condolences may be expressed at www.abbeyfh.com.

Ethel &#8220;Marie&#8221; Harmon, 73, of Tallahassee, Florida and formerly of Palmetto, Florida, passed away on October 17, 2021, after an extended illness. She was born January 6, 1948, in Ironton, Ohio to William Harrison and Helen Marie... View Obituary & Service Information

The family of Ms. Ethel Marie Harmon created this Life Tributes page to make it easy to share your memories.

Send flowers to the Harmon family.