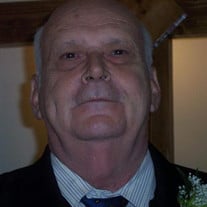 George Ronald Hicks of Woodville, Florida, passed away on Sunday, September 24, 2017. Ron Hicks will be lovingly remembered by his children, Joe and Tiffany Hicks, and Dorothy J. (Hicks) Herman and Jillyann Sanchez; grandchildren, Shelle (Herman) Hartsfield, Christine Herman, Dorothy “Jayne” and Leah Herman, Jessica Herman, Harper Hicks, Penn Hicks and McKinney Hicks; great- grandchildren, Kirsten, Brandon and Alan; siblings, Dorothea (Hicks) Ritzen and Roger and Kathy Hicks. Ron was born on August 24, 1943 in Philadelphia, Pennsylvania to the late George and Dorothy (Sinclair) Hicks, of blessed memory. Along with his family, he moved to University City, Missouri on February 18, 1949. He also lived in Pascagoula, Mississippi and South Carolina. In the early 1990s, he moved to Woodville, Florida to be closer to his children and grandkids. He worked in multiple jobs to support his family over the years. A few of them include a double decker bus driver, an electrician, and oystering. His last career that ended in March of 2009 was as a Security Officer for DSI at CSG in Wakulla County Florida. A memorial service to honor and celebrate his life is 7:00 PM, Wednesday, September 27, 2017, at the First Church of the Nazarene. Online condolences may be expressed at www.abbeyfh.com.

The family of Mr. George Ronald Hicks created this Life Tributes page to make it easy to share your memories.

George Ronald Hicks of Woodville, Florida, passed away on Sunday,...

Send flowers to the Hicks family.