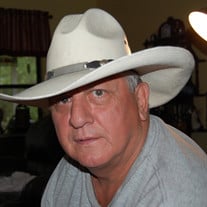 George Wayne Searcy, a native of Tallahassee, FL, passed away on July 9, 2019, after a challenging battle with Idiopathic Pulmonary Fibrosis (IPF). Wayne graduated from FSU in 1972 and retired as a Regulatory Program Administrator, from the Department of Agriculture with the State of Florida in 2002. He rotated his time between his residence in Monticello and his mountain cabin (Little Bear Paw) in Ellijay, Georgia which he loved. Wayne was preceded in death by his parents Henry E. Searcy, Jr. and Louise Mays Searcy. Wayne is survived by his wife of 25 years, Cheryl C. Searcy; brothers, Buddy (Patty) Searcy and Dan Searcy; son, Brian (Katie) and daughter Amy; stepsons, Stoney Thompson (Lisa) and Jason Thompson (Missie); grandchildren, Colby Kinsey, Brittany Kinsey, Carter Skipper Searcy, Henry Searcy, Harrison Searcy, Reanna Thompson, Gracie Thompson, Logan Thompson and Hannah Thompson. Wayne enjoyed watching college sports especially Florida State. He loved to read a good book and enjoyed dove and duck hunting. Wayne loved all animals especially his four dogs, Liza Jane, Bleu Bell, Daizee May and Barney Fife. He adored his nine grandchildren and loved “pulling their legs” and yacking with them on text messages. He referred to them as his flock of “weedos”. He enjoyed taking them fishing down at his pond on his property or playing with them as youngsters in his pool. Wayne loved his family and friends and really enjoyed clowning around with everyone. Wayne had a phrase that had a lot of meaning and always reminded the grandchildren to, “Endeavor to Persevere”. He was a loving and caring husband, Dad, Pop, brother and friend who will be greatly missed. Wayne’s service will be Tuesday, July 16th at 11 am at Abbey Funeral Home, 4037 N. Monroe Street, Tallahassee, Florida, 32303. In lieu of flowers please make a donation to one of the following in Wayne Searcy’s honor: Ebenezer Baptist Church PO Box 652 Monticello, Florida 32345 or Big Bend Hospice 925 W. Washington Street Monticello, Florida 32344 Online condolences may be expressed at www.abbeyfh.com.

George Wayne Searcy, a native of Tallahassee, FL, passed away on July 9, 2019, after a challenging battle with Idiopathic Pulmonary Fibrosis (IPF). Wayne graduated from FSU in 1972 and retired as a Regulatory Program Administrator, from the... View Obituary & Service Information

The family of Mr. George Wayne Searcy created this Life Tributes page to make it easy to share your memories.

George Wayne Searcy, a native of Tallahassee, FL, passed away...

Send flowers to the Searcy family.