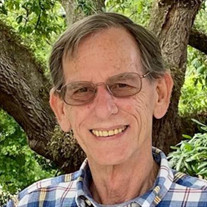 George Skinner died peacefully in his home in the early morning hours April 6, 2021. He had family and friends around him letting him know how much he was loved and will be missed. George was born in Fairmont, West Virginia to Jack Louis and Nancy Welch Skinner. George moved from West Virginia to Fort Lauderdale with his family in the early sixties. He graduated from Fort Lauderdale High School and then moved to Tallahassee to attend Florida State University. He made Tallahassee his home after college. He worked for Unisys Corporation for almost 30 years as a Systems Analyst. He shared his time between Tallahassee and Boston during this extended period. His time in Boston turned him into an avid Red Sox fan. George was married twice. He met his current wife, Tricia, on a blind date playing bridge. They married in 1995 and would be celebrating their 26th wedding anniversary in three weeks. He had two sons from a previous marriage, Christopher Stevens Skinner and Gregory Joseph Skinner. George and Tricia enjoyed time spent with four amazing grandchildren who all lived in Tallahassee. George’s hobbies included genealogy. He did much of his work in this field for his own family tracing ties to the Revolutionary War. But he helped friends learn of their past also and made a lot of people happy to know where they had come from even if a few scoundrels emerged along the way. Another one of his past times was catching up with old fraternity brothers he met while attending Florida State University. George was president of the Phi Psi fraternity during his junior year at FSU. They were a great group of men who could laugh for hours telling the same stories each time they would get together. George and this group had an incredibly strong bond. George was preceded in death by his parents, a brother and twin sisters. He is survived by his brother, Tom, who now lives in Holyoke, Massachusetts; and a sister, Debbie, living in West Palm Beach Florida. He has numerous nieces and nephews. There are two very close first cousins living in Georgia and West Virginia and their mother that George stayed closely in touch with throughout the years. He will be missed by many and a celebration of his life is planned for some time in the fall. No particulars are available yet. Online condolences may be expressed at www.abbeyfh.com.

George Skinner died peacefully in his home in the early morning hours April 6, 2021. He had family and friends around him letting him know how much he was loved and will be missed. George was born in Fairmont, West Virginia to Jack Louis... View Obituary & Service Information

The family of Mr. George Gregory Skinner created this Life Tributes page to make it easy to share your memories.

George Skinner died peacefully in his home in the early morning...

Send flowers to the Skinner family.