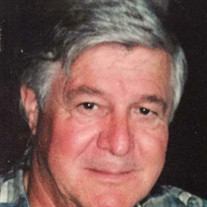 Gerhard Hofbauer, 76, of Tallahassee passed away unexpectedly on July 14, 2017. Son of the late Franz and Helene (nee Czehovsky) Hofbauer, he was born on March 5, 1941 in Schoengrafenau, Germany, now part of the Czech Republic. As a young man he immigrated to Montreal, Quebec where he would meet his wife to be, Lucia Marie Lavoie, and together they soon began a family with his first two sons Eddy and Franz. Shortly afterward the family moved to Hollywood, Florida where he and Lucia would have their third son, Eric. Starting with a single car Gerhard would go on to own and operate taxi companies in both Miami and Tallahassee as well as several properties. Despite his tireless hard work to provide for his family he never ceased to dream of adventure which was realized in his passion for sailing. He also never lost his love of his home country Germany and the family he still had there. He was a loving husband and a caring and nurturing father. He is survived by his wife of 52 years, Lucia Hofbauer; sons, Eddy Hofbauer (Jen), Franz Hofbauer (Rene) and Eric Hofbauer (Heather); grandchildren Tyler, Jade and Finn; and brothers, Franz, Karl, Walter, Manfred and Helmut; as well as numerous nieces and nephews. He is predeceased by his sisters, Poldi and Waltraud. The family will receive friends from 6:00 until 7:30, Friday, July 28, 2017, at Abbey Funeral Home. A Funeral Mass will be celebrated at 10:30 AM, Saturday, July 29, 2017, at Co-Cathedral of St. Thomas More. Condolences may be expressed at www.abbeyfh.com.

Gerhard Hofbauer, 76, of Tallahassee passed away unexpectedly on July 14, 2017. Son of the late Franz and Helene (nee Czehovsky) Hofbauer, he was born on March 5, 1941 in Schoengrafenau, Germany, now part of the Czech Republic. As a young... View Obituary & Service Information

The family of Mr. Gerhard Hofbauer created this Life Tributes page to make it easy to share your memories.

Send flowers to the Hofbauer family.