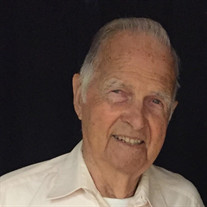 Howard Othan Jones, 87, a resident of Tallahassee, peacefully passed into the loving arms of Jesus on Thursday, July 26, 2018, at home, while surrounded by his loving family. A son of the late Russell Twitty Jones and Zona Owens Jones, he was born at home in Grady County, Georgia on July 21, 1931. Also preceding him in death is his loving wife of 45 years, Marlene Jane Holweger Jones; son, Buddy Jones; brothers, Sam Jones, James Jones and Russell T. Jones, Jr.; and sisters, Betty Costello, Mae Hart, Carlene Jenkins and Patricia Dempsey. In 1970, while in North Dakota, he, along with his children, Sue, Naomi, Gloria, Sonny and Buddy, met Marlene Jane Holweger Foley, and her children, Jody, Jeff, Dave, Cindy and Debbie. Howard and Marlene married in 1971 and moved to Tallahassee with their family. He was also a believer in Christ and lived a Christian life. He retired after 20 faithful years of serving his country in the United States Air Force. Following his military retirement, he worked for 30 years and retired from the United States Postal Service as a Route and Carrier Supervisor in Tallahassee. During this time, he earned two degrees from FSU. He was also Past Governor and earned his Fellowship and Pilgram Degree from the Loyal Order of the Moose, Tallahassee #1075. He is survived by his children, Sue Jackson (Mark), Naomi Smith (Albert), Gloria Hurley, Sonny Jones (Karen), Debbie Foley, Dave B. Foley, Cindy Foley Gibson, Jeff Foley and Jody Foley Henderson (Vernon); numerous grandchildren, including the three that they raised in their home, Davey Foley, Holly Foley and Tia Gibson; and numerous great-grandchildren, nieces, nephews and cousins; and his brother, O.C Jones. The family will receive friends from 5:30 until 7:00 PM, Monday, July 30, 2018, at Abbey Funeral Home. The funeral is 2:00 PM, Tuesday, July 31, 2018, at Abbey Funeral Home, with interment following at Tallahassee Memory Gardens. Memorial donations can be made to Big Bend Hospice. Online condolences may be expressed at www.abbeyfh.com.

Howard Othan Jones, 87, a resident of Tallahassee, peacefully passed into the loving arms of Jesus on Thursday, July 26, 2018, at home, while surrounded by his loving family. A son of the late Russell Twitty Jones and Zona Owens Jones, he was... View Obituary & Service Information

The family of Mr. Howard Othan Jones created this Life Tributes page to make it easy to share your memories.

Send flowers to the Jones family.