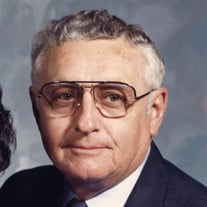 Colonel Hugh Hampton “Hamp” Wilson, US Army, Ret., of Tallahassee, peacefully passed away at his home on Friday, March 06, 2020, after a long and happy life, three days short of his 93rd birthday. Hamp was married to his wife of 71 years, Margaret “Peggy” Wilson. He was the son of the late Hugh and Ruby Wilson, was a native of Irvine, Kentucky, and had resided in Tallahassee, Florida, since 1988. He was a retired NASA Senior Executive, and had spent over 30 years in managing federal contracts. He served tours at the Army Missile Command and NASA’s George C. Marshall Space Flight Center in Huntsville, Alabama; the NASA John F. Kennedy Space Flight Center in Cape Canaveral, Florida; and NASA Headquarters in Washington, DC. During those tours, he served as NASA’s Director of Procurement Policy while at Headquarters, and as Director of Procurement and Contracts at the Marshall Space Flight Center in Huntsville. During his second and final tour at Marshall, he led the team that negotiated the contractual settlement with Morton Thiokol for the Shuttle Challenger accident. Subsequent to his retirement from NASA, and after locating to Tallahassee, he served as a business consultant to major aerospace companies and as an advisor to NASA contracting and engineering managers. He received much pleasure from the courses that he taught and the consulting work that he did for NASA and aerospace companies after his retirement, resulting in many friends and acquaintances all over the nation. During his career, Mr. Wilson served as chapter president of the National Contract Management Association (NCMA), Reserve Officers Association (ROA), the Alabama Alumni Association, and as President of the Centerville Rural County Association. He also served as a member of the Board of Directors of the Challenger Learning Center in Tallahassee; the Tallahassee Freenet, and the Florida Institute of Technology (FIT) national alumni association. He served in the US Navy during World War II, after which he continued his military service in the US Army Reserve until he retired as a Colonel. For his Army service, he received the Army Commendation Medal and the Army Meritorious Service Medal, as well as numerous service medals. At NASA, he received their highest recognition, The Distinguished Service Medal, as well as the NASA Medal for Outstanding Leadership and the NASA Exceptional Service Medal, and numerous other special achievement and service awards. He earned his undergraduate degree at Rollins College in Winter Park, Florida and his graduate degree from the Florida Institute of Technology in Melbourne, Florida where he served as an adjunct professor at their Melbourne, Florida and their Alexandria, Virginia campuses. He was a member of the various Masonic orders and a charter member of the Marzuq Shrine Temple in Tallahassee and the Cahaba Shrine Temple in Huntsville, Alabama. At the Marzuq Shrine Temple, he served on the Hospital Committee and was very active escorting children to the various Shriners Hospitals for Children. He was a member of the Episcopal Church and a former member of Rotary Clubs in Tallahassee and Richmond, Kentucky, and the Lions Club in Tallahassee. Hamp loved his wife Peggy with a passion and she accompanied and supported him on many of his business and military trips. He was a devoted husband, father and grandfather and derived much of his pleasure from his family. He always considered his marriage to Peggy, and being the father of Lisa and Mark, and the grandfather of Catherine and Luke, as the most important achievements of his life. In addition to his wife, Peggy, he is survived by his daughter and son-in-law, Lisa and William “Bill” Branch, and their daughter, Catherine Michelle, all of Tallahassee; his son and daughter-in-law, Mark Hampton and Debra “Debbie” Wilson, and their son, Luke Hampton, all of Lake Park, Georgia; and a sister and brother-in-law, Judy and Joe Warren, of Irvine, Kentucky. A memorial service will be held by the family at a later date. He will be inurned at Roselawn Cemetery. In lieu of flowers, contributions in his memory may be made to the Shriners Hospitals for Children, 12502 USF Pine Drive, Tampa, Florida 33612-9411, or to a charity of your choosing. Online condolences may be expressed at www.abbeyfh.com.

Colonel Hugh Hampton &#8220;Hamp&#8221; Wilson, US Army, Ret., of Tallahassee, peacefully passed away at his home on Friday, March 06, 2020, after a long and happy life, three days short of his 93rd birthday. Hamp was married to his wife of... View Obituary & Service Information

The family of Col. Hugh Hampton Wilson created this Life Tributes page to make it easy to share your memories.

Send flowers to the Wilson family.