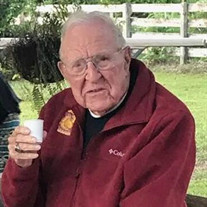 Jack Clayton Rosenau went West on April 20, 2019. He was born on October 26, 1919, in Detroit, Michigan. He is the oldest son of Arthur Henry Rosenau (1900-1980) and Florence Muriel McNally (1896–1993). The Scot-Irish McNally family migrated to London, Ontario, Canada in the 1890s where Florence McNally was born to Louisa L. Stevenson and Robert J. McNally. Jack’s grandparents are Gottliebe Pannick and Gottfried Rosenau, who migrated from Germany to Detroit in the 1880s. Jack graduated in 1939 from Cass Technical High School’s Aeronautical Curriculum and joined the United States Marine Corps Reserve in 1937 while still a high school student. His fighter squadron was called to active duty in 1940. He served as weather forecaster for the First Marine Air Wing in the South Pacific during World War II, stopping at Noumea, New Caledonia, and Espirito Santo as part of the Guadalcanal Campaign. Upon his return to the States in 1943, Master Technical Sergeant, Jack’s assigned responsibilities included operation of the weather office at El Toro Marine Corps Air Station in Santa Ana, California. It was here he met and married his wife, Marine Sergeant Jean L. Aitkenhead (now deceased), and was honorably discharged in 1945. While in the Marine Corps, Jack flew in several military aircraft, including the S.B.D. Dauntless Dive Bomber. He earned his private pilot certificate in 1964, flying out of Wheeler Field, Oahu, Hawaii. His Instrument Rating was earned in 1978. Jack earned a geology degree at Michigan State College in 1949 and was commissioned in the Army Field Artillery. His commission was transferred to the Air Force Reserve in 1950, where he then served as a weather forecaster, and promoted to Lieutenant Colonel in 1970, and retired in 1979 after 30 years of military service. Jack was employed with the Michigan Geological Survey until hired by Dr. D.B. Steinman, Consulting Engineer, for construction of the Mackinac Straits Bridge, joining Upper and Lower Michigan. On completion of the bridge work, Jack was hired by the U.S. Geological Survey’s Ground Water Branch serving in New Jersey, Hawaii, and Florida, where he coauthored Springs of Florida. Jack was a member of several scientific organizations, including the Geological Society of America. The United States Coast Guard Auxiliary has been a special organization for Jack. He joined Flotilla 13 at Shell Point, Florida, in 1974, and flew his Cherokee (N-192FC) for search and rescue patrols. Over a span of twenty-five years, Jack flew 550 patrols and Tallahassee inducted him into their “Aviation Wall of Fame” in 2006. Jack was a member of the Military Officer Association of America, the Experimental Aviation Association, Veterans of Foreign Wars, and was an active member of both the Quiet Birdmen and the Marine Corps League. Jack was also a member of the Tallahassee Saint Andrew Society since 1979. Jack’s children include: Andrew Rosenau (Tosh), Ann Stanton (Greg), James Rosenau (Terri), Robert Rosenau (April), David Rosenau (Jan), Steven Rosenau (Delane), and Sandra Rosenau (John Dorian). Jack has 16 grandchildren, and nine great grandchildren. Visitation is 10:30 until 11:30 AM, Thursday, April 25, 2019, at Abbey Funeral Home, 4037 North Monroe Street, Tallahassee, Florida 32303, with the funeral service beginning at 11:30 AM. Interment, with military honors, will follow at Tallahassee Memory Gardens. In lieu of flowers, memorial contributions may be made to Big Bend Hospice, 1723 Mahan Center Boulevard, Tallahassee, Florida 32308, 850-878-5310. Online condolences may be expressed at www.abbeyfh.com.

The family of Mr. Jack Clayton Rosenau created this Life Tributes page to make it easy to share your memories.

Send flowers to the Rosenau family.