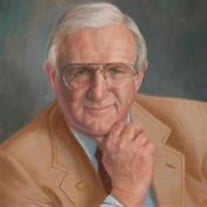 James (Jim) Brandon Powers peacefully passed on to be in God’s arms December 10, 2019, in Tallahassee, Florida. Jim was born in Grand Rapids, Minnesota and raised in St. Petersburg, Florida, where he graduated from St. Petersburg High School in 1946. Jim served in the United States Marine Corps and was honorably discharged in 1949, as a Sergeant in the Marine Wing Service Squadron One in Santa Ana, California. He attended Chaffey College in Ontario, California, where he met and married the love of his life, Patsey Jane Olsen Powers. Jim completed his education at the University of Florida, College of Pharmacy in 1953, with a Bachelor of Science in Pharmacy degree (BPharm). He was a member of Kappa Psi Pharmaceutical Fraternity, Rho Chi Pharmaceutical Honor Society and Gamma Sigma Epsilon Chemical Fraternity. After interning with his brother-in-law, Ed Felosi, in Coleraine, Minnesota, Pat and Jim returned to Florida, where he practiced as an independent retail pharmacist and attended the Stetson College of Law until he joined the Bureau of Narcotics of the Florida State Board of Health. After the Bureau was disbanded, Jim worked in the Florida Medicaid program and other programs within the Florida State Board of Health. In 1969, Jim was selected by the Florida Pharmacy Association (FPA) to be the Executive Vice President and served in that position for 21 years as a passionate advocate for patients, pharmacists and pharmacy owners. During his tenure at the FPA, the Association realized a number of legislative achievements enhancing the practice of pharmacy and established the Florida Pharmacy Foundation, the Recovering Pharmacists Network of Florida, Pharmacy Provider Services Corporation (PPSC), a Pharmacy Political Action Committee (PAC), won numerous awards with the Florida Pharmacy Today Journal and owned a credit union that is now the First Commerce Credit Union. Jim received a Certificate of Appreciation from Governor Graham in 1986, for his valuable and distinguished service to the State of Florida on the Governor’s Commission on Drug and Alcohol Concerns. He was appointed to the Florida Board of Pharmacy by Governor Bush and served in that capacity from 2002 to 2009. His passion for the profession of pharmacy continued as he spearheaded the Florida Independent Pharmacy Network (FIPN), an organization dedicated to addressing issues affecting independent pharmacy owners at the state level. He was the recipient of many professional awards during his career, including the University of Florida, College of Pharmacy Distinguished Alumnus Award, American Pharmaceutical Associate Hugo H. Schaefer Medal, FPA James H. Beal Pharmacist of the Year Award, FSHP Pharmacist of the Year Award, Bowl of Hygeia Award and a special Florida A & M University College of Pharmacy and Pharmaceutical Sciences Award, which recognized his life-long commitment to the profession he loved. Jim was also active in the Tallahassee community as member of the Killearn Methodist Church and a coach and umpire in Tallahassee youth baseball, basketball and football. He was predeceased by parents, William H. Powers and Mary Lulu Brandon Powers; siblings Dave, Jalene, Shirley and Bill. He leaves behind his wife of 70 years, Patsey Jane Olsen Powers; his sons, Kelly Powers and Robby Powers (Sheri), Tallahassee; his sister, Mary Lou Matthews, Hartsville, South Carolina; as well as two grandchildren, Sarah Roy (Jamie), Columbus, Georgia and Kayla Powers, Tallahassee; and two great-grandchildren, Stella Rose Roy and Kylie Grace Roy. The family would like to express gratitude to the Alzheimer’s Project and Big Bend Hospice staff during this time. In lieu of flowers, the family requests memorial donations recognizing Jim be sent to the James B. and Patsey J. Powers Scholarship Fund, in care of the Florida Pharmacy Foundation at P.O. Box 266977, Weston, Florida 33326. Funeral arrangements are handled by Abbey Funeral Home and Tallahassee Memory Gardens, 4037 North Monroe Street, Tallahassee, Florida 32303. The family will have a private service and announce a reception to celebrate Jim’s life in their home at a future date. Online condolences may be expressed to the family at www.abbeyfh.com.

James (Jim) Brandon Powers peacefully passed on to be in God&#8217;s arms December 10, 2019, in Tallahassee, Florida. Jim was born in Grand Rapids, Minnesota and raised in St. Petersburg, Florida, where he graduated from St. Petersburg High... View Obituary & Service Information

The family of Mr. James Brandon Powers BPharm created this Life Tributes page to make it easy to share your memories.

James (Jim) Brandon Powers peacefully passed on to be in God’s...

Send flowers to the Powers family.