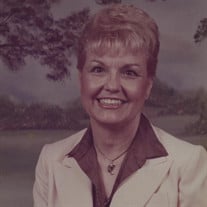 On Sunday, December 1, 2019, Jean Marie Covey Flatt, of Tallahassee, Florida, passed away at age 94. Jean was born on January 22, 1925, to Ansel and Emma Covey, in the small town of Hemlock, New York. Jean was married to her longtime sweetheart, the late Arthur Walter Flatt Jr. for 69 years. Jean was not just a daughter and a wife; she was also a loving mother and the coolest grandmother. We are not just talking about your average woman; we are talking about someone who knew the secret to cheating death. When asked, Jean would be the first to tell you the secret to her longevity, “Ya gotta keep moving! The minute you stop moving is the minute you start dying.” Jean was not a fan of sitting around and waiting for someone to help her with life’s challenges. She lived a somewhat modified version of the infamous quote by Hunter S. Thompson. It sounded a bit like this, “I want to live my life independently surrounded by family and friends. I take my vitamins, but I know the importance of indulging in chocolate covered cherries and a glass of red wine when necessary. Life to me is being able to drive my john deer lawn mower, cutting my own grass and cleaning my own house! When faced with limitations from aging, I will not be defeated, I will hire a personal trainer and attend Gold’s gym on a regular, I don’t care if I’m 94!” She used to say, “When the going gets tough, the tough get going!” She lived by that to her very last breath. She was a force in life to be reckoned with and the matriarch of our entire family. Her presence, ever so strong, will be immensely missed. Left to carry on her legacy, is her daughter Sandra Flatt Harrison (Bruce), Arthur Covey Flatt (Paula), 8 grandchildren, Karli Flatt O’Neal (Eddie), Kasi Flatt Pulliza (Milton), Alexandra Covey Flatt, Brandi Sauls (Ryan), Katlin Stafford, Tiffany Flatt, Mia Flatt, Matthew Flatt and 13 great-grandchildren. She was preceded in death by her husband Arthur Walter Flatt, her son George Douglas Flatt, and her granddaughter, Kristina Nicole Flatt. The visitation is from 1:30 until 2:30 PM, Thursday, December 5, 2019, at Abbey Funeral Home, with the funeral service beginning at 2:30 PM. Entombment follows at Tallahassee Memory Gardens. Online condolences may be expressed at www.abbeyfh.com.

On Sunday, December 1, 2019, Jean Marie Covey Flatt, of Tallahassee, Florida, passed away at age 94. Jean was born on January 22, 1925, to Ansel and Emma Covey, in the small town of Hemlock, New York. Jean was married to her longtime sweetheart,... View Obituary & Service Information

The family of Mrs. Jean Maria Flatt created this Life Tributes page to make it easy to share your memories.

Send flowers to the Flatt family.