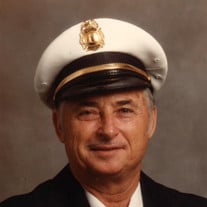 Jesse Jackson Freeman, Jr., 87, of Havana, peacefully passed away on Sunday, July 30, 2017. He was born on August 4, 1929, in Quincy, Florida, to the late Jesse Jackson Freeman and the late Annie Mae Thompson Freeman. Following his graduation from Gadsden High School in 1947, he faithfully served his country in the United States Air Force during the Korean War. He worked for the Tallahassee Fire Department for 39 years, retiring at the rank of Captain. He was a member and a deacon at Seminole Baptist Church, but above all, he loved his Lord, his wife and his family. Survivors include his wife, Roberta R. Freeman; children, Jack (Sarah) Freeman and Jane (Bob) Chesser; grandchildren, J.P (Lindsey) Chesser, Jamie Conrad, Carly Chesser Robinson and Justin Freeman; and five great-grandchildren. The funeral is 11:00 AM, Friday, August 4, 2017 at Seminole Baptist Church. The family will receive friends from 10:00 until 11:00 AM, Friday at the church. Interment is at Hillcrest Cemetery in Quincy. In lieu of flowers, donations may be made to Big Bend Hospice. Online condolences may be expressed at www.abbeyfh.com.

The family of Mr. Jesse J. Freeman Jr. created this Life Tributes page to make it easy to share your memories.

Send flowers to the Freeman family.