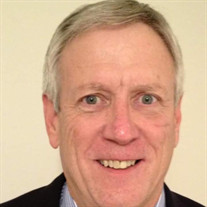 On March 26th, 2021, John Purvis passed into eternal rest and was welcomed into the arms of his Father. John was born on June 26th, 1952, to Ross and Lillian Purvis. He was born and raised in Miami, Florida, where he enjoyed hunting, fishing, and camping in the Everglades with his brothers Dave and Russ. In 1974, after graduating from the University of Florida, he married Julie Melvin in Gainesville, Florida. John then attended medical school at the University of South Florida. After completing his first year of family practice residency at the Tallahassee Memorial Family Practice Residency, he finished his residency at Carolina's Medical Center in Charlotte, North Carolina. During that time, he became a father to Rachel. His second daughter, Megan, was born three years later. He later started Union Family Practice with John Vick, MD, in Monroe, North Carolina. After years building up the practice, he was invited to join the faculty at East Carolina University Department of Family Medicine, where he was eventually Vice Chairman of Clinical Services. Missing Florida, the family returned to Tallahassee where he joined the Tallahassee Memorial Family Practice Residency Program, advancing to the role of Director for a number of years. In recent years, he retired from practice, and worked part-time for the Florida Department of Disability Determination. Throughout his career, he mentored and earned the respect of many physicians, and won the affectionate admiration of numerous patients. In addition to his skill as doctor, John was known for his intellect and wry sense of humor. An avid gardener and adept fisherman, John helped plant one church in North Carolina, and served three congregations as an elder. More importantly, he sought the Lord all his days. John is survived by his wife, Julie; daughters, Rachel Woodham (Jay) and their children James, Daniel, and Julianna; Megan Andino (Rolando) and their children Matthew and Isabella; and his brothers, Dave and Russ. His funeral service will be held on Wednesday, March 31st, at Wildwood Presbyterian at 11 o'clock, with a private burial following. A preceding visitation will be held at 10 o'clock. In lieu of flowers, donations may be sent to World Vision International or Compassion International. Online condolences may be expressed at www.abbeyfh.com.

On March 26th, 2021, John Purvis passed into eternal rest and was welcomed into the arms of his Father. John was born on June 26th, 1952, to Ross and Lillian Purvis. He was born and raised in Miami, Florida, where he enjoyed hunting, fishing,... View Obituary & Service Information

The family of Mr. John Ross Purvis MD created this Life Tributes page to make it easy to share your memories.

Send flowers to the Purvis family.