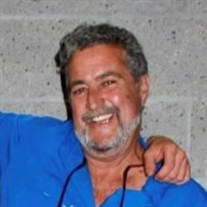 John William Wallace, Jr., “Johnny”, died January 31, 2022, at home under the care of hospice and with his family surrounding him. He was born October 12, 1962, in Tallahassee, Florida to John William Wallace, Sr. and Betty “Maxine” Hart Wallace, who both predecease him. He is survived by his sons, Seth Wallace, Michael “Tyler” Wallace and Chris Cooper; his sister, Dina Dodge (Kris); a niece, Chantel Dodge; a nephew, Kyle Wallace; his lifelong friend and a significant part of his life, Harriette Priest. She was like a stepmother to Johnny’s children. Johnny attended Rickards High School where he was on the baseball team. He joined the Army at a young age. He was most recently an electrician employed by Metro, but his true passion and was most known for his work with vinyl siding. He lived in Tallahassee all his life and was known by many as a very witty guy with a great sense of humor. He enjoyed fishing, playing poker, collecting baseball cards and most of all, Johnny never met a stranger. A memorial service will be held at 12:00 PM, Saturday, February 19, 2022, at Sopchoppy Congregational Holiness Church, 83 Sheldon Street, Sopchoppy, Florida 32358. In lieu of flowers, donations may be made to the American Cancer Society.

The family of Mr. John William Wallace Jr. created this Life Tributes page to make it easy to share your memories.

Send flowers to the Wallace family.