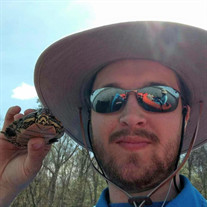 Jonathan “Jonah” Douglas Hall, 27, of Tallahassee, passed away, surrounded by family, on Tuesday, April 20, 2021. Born in Tallahassee, on March 2, 1994 he was the son of Keith “Doug” Douglas Hall and Cherie Evelyn French Hall. At only 6 days old, Jonah’s mom began taking him to work with her to the Tallahassee Museum. It became his second home & its staff became the village that helped to raise him. Its natural setting fostered his love for all things outdoors & its zoo cultivated his love for all creatures big & small. He was employed as a zip-line guide at the time of his passing. From a young age Jonah climbed anything he could find and after high school became a regular at Tallahassee Rock Gym. His love of everything outdoors always showed, and he spent much of his off-time backpacking, kayaking, camping and fishing. He also had a passion for video games and made friends across the world. Though rambunctious & hardheaded, his heart yearned for everyone he met. He saw people through rose colored glasses, always seeing the best in others while radiating joy on everyone. Jonah dearly loved his family and friends, and they were blessed to enjoy many happy memories with him. In addition to his parents, he is survived by his sister, Morgan Hall; longtime girlfriend, Elizabeth Bryan; paternal grandparents Norm and Sheila Hall and Thom and Patti Hale. He was preceded in death by his maternal grandparents Buster and Shirley French. A celebration of life will take place Sunday, April 25th, at 5:30pm at the Tallahassee Museum, 3945 Museum Drive, Tallahassee, FL 32310. In lieu of flowers, memorial donations may be made to the Tallahassee Museum. Online condolences may be expressed at www.abbeyfh.com.

The family of Mr. Jonathan Douglas Hall created this Life Tributes page to make it easy to share your memories.

Send flowers to the Hall family.