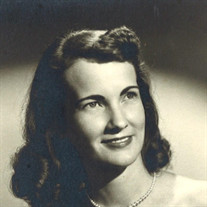 June M. Allen Tidwell passed away on March 7, 2018, after a brief illness. Her wish was to be at least 100 years old before leaving this earth, but was unable to make that goal; although she came close. June was a native of Ft. Braden, Leon County, Florida and a fifth generation Floridian. She attended the old Fort Braden School and graduated from Leon High School in 1946. After graduation, she moved to Panama City; the shipyard there was closing, but needed a typist to work on the inventory in the yard. After about six months of working as a typist, she relocated to Jacksonville. She lived and worked in Jacksonville for several years working for various mortgage companies. She then married and moved around the United States, living in Kansas, California, Virginia and upstate New York. After divorcing in 1958m, she returned to Jacksonville. She remarried and divorced again in 1974. She remained in Jacksonville and worked for the Clerk of Circuit Court until 1986, at which time she moved to West Palm Beach and went to work for the Palm Beach County Clerk of Circuit Court. She retired in 1994, returning to Jacksonville and enjoyed her time traveling and staying on the lake in Keystone Heights with friends; and as she always said, “doing what I want to do, when I want to do it.” Because of the illness of her remaining siblings, she relocated to Tallahassee in 1995. After her siblings had passed, she decided that she was tired of packing up and moving, so she chose to remain in Tallahassee. She bought a map of the city and proceeded to learn her way around the town in which she was born. The graduating class of 1946 was meeting periodically and she re-joined the group of the ’46 Club, attended the dinners and got reacquainted with her school mates. She found joy and happiness going to the church her Mother had attendee for years, working in her yard, working on the five generations of her family’s history, meeting and visiting new friends, volunteering at the Fort Braden Community Center (the old school), maintaining a photographic history of the Lunch Bunch of Fort Braden, joining the exercise class for seniors and being the “drop-off” for people who no longer wanted a pet. The dogs and cats that she did not keep, she found homes for. Nothing made her happier than when she had a chance to sit in the yard with the cats and listen to the birds and watch the squirrels. She loved the water and evenings often found her sitting on a bench and Williams Landing watching the birds as they dived into Lake Talquin for their evening meal or watching the “happy” fishermen as they brought in their catch of the day. But then, after saying many times that she would never marry again, she finally met the true love of her life, Arnold (Ace) Tidwell and they married at Mt. Elon Church, Smith Creek Road, by the Rev. Carl Powell. Rev. Powell had known Ace since he was little and had cut Ace’s lawn in Monticello, Florida he was eight years old. Never having children of her own, (the word stepchild was not in her vocabulary), she was blessed with three bonus-sons by her second marriage: Michael, James (Jim) and Timothy Miller. Michael and Timothy preceded her in death. Jim lives in Old Town, Florida and they continued to communicate by phone or email. When she and Ace married, she was blessed with one bonus-son, Charles “Chuck” Tidwell and one bonus-daughter, Susan T. (Tedd) Bryant; along with five grandchildren and four great-grandchildren—and counting! She was the daughter of the late William C. Allen, Jr. and Epsey Black Allen, who have preceded her in death. Also preceding her in death were three sisters and four brothers: William Ernest Allen (died as an infant), Elaine Newell Thomas, Willie Mae (Bill) Johnson, Lila Vause, Alex “Buddy” Allen, Adrian Allen and Billy Hugh Allen. She leaves behind numerous nieces and nephews; great-nieces and nephews; and great-great-nieces and nephews. And hopefully, many more yet to come. A special thanks to Suzanne Long of Tallahassee for her loving care and support to her Aunt June over the years. They shared many good times and lots of laughter. Visitation will be held on Monday, March 12, 2018, at 1 p.m. with service at 2 p.m. at Bible Believers, 6341 Blountstown Highway, Tallahassee, Florida 32310. In lieu of flowers June requested that a donation be made to Big Bend Hospice at 1723 Mahan Center Boulevard., Tallahassee, Florida 32308. Online condolences may be expressed at www.abbeyfh.com.

June M. Allen Tidwell passed away on March 7, 2018, after a brief illness. Her wish was to be at least 100 years old before leaving this earth, but was unable to make that goal; although she came close. June was a native of Ft. Braden, Leon... View Obituary & Service Information

The family of Mrs. June Allen Tidwell created this Life Tributes page to make it easy to share your memories.

Send flowers to the Tidwell family.