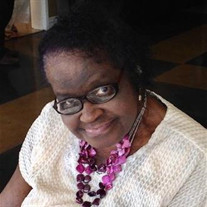 Katerine Lawson Smith, 90, who retired from Tallahassee Memorial HealthCare, transitioned into eternal life and received the Crown of Glory on Monday, January 7, 2019, while surrounded by her loving family. A daughter of the late Solomon Lawson... View Obituary & Service Information

The family of Mrs. Katerine Lawson Smith created this Life Tributes page to make it easy to share your memories.