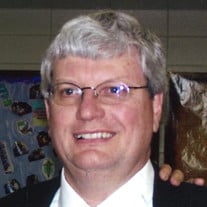 Keith M. Roberts, 64, died April 2, 2017, with his family by his side. Born in Alton, Illinois on October 8, 1952, he was the son of the late Robert J. and Rosella (Dehner) Roberts. He served at Tallahassee Community College for 10 years, where he was the first Intramural Sports Coordinator and Student Activities Coordinator, and Personnel Director. He retired from the Leon County Board of County Commissioners after 25 years. He married Carol S. Murray on August 30, 1975, and she survives along with two sons: Timothy (Velma) and Shaun (Dawn), and grandchildren: Jaxson, Zachary, Lydia, Luke, Levi and Lazarus. Also surviving are three brothers and a sister and their spouses, Robin (Carole) Roberts, twin brother, Kevin (Jill) Roberts, Michael (Betty) Roberts, and Elaine (Bob) Weaver and numerous nieces and nephews. In addition to his parents, Keith was preceded in death by his eldest brother and sister-in-law, Gary and Rosemarie Roberts. Keith served as a board member and officer on many non-profit boards; was a very active Kiwanian for 36 years; but the love of his service life was as a leader in the Royal Ranger Boys ministry. He was Senior Commander of Outpost 10 at Christian Heritage Church; Conference Commander for the Sonshine Conference and served in several different national leadership positions. A memorial service will be held Saturday, April 8, from 10 am to 12 noon at Christian Heritage Church in Tallahassee. In lieu of flowers, memorials may be given to Royal Ranger Outpost10, Christian Heritage Church, 2820 Sharer Road, Tallahassee, FL 32312; or the Miracle Sports Program, in care of the Florida Disabled Outdoor Association, 2475 Apalachee Parkway Ste 205, Tallahassee, Florida 32301. Online condolences may be expressed at www.abbeyfh.com.

Keith M. Roberts, 64, died April 2, 2017, with his family by his side. Born in Alton, Illinois on October 8, 1952, he was the son of the late Robert J. and Rosella (Dehner) Roberts. He served at Tallahassee Community College for 10 years,... View Obituary & Service Information

The family of Mr. Keith M Roberts created this Life Tributes page to make it easy to share your memories.

Send flowers to the Roberts family.