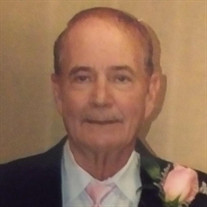 Kenneth R. Henley, 75, was born November 24, 1945, in St. Louis, Missouri to Floyd and Loraine Henley. He attended McKinley High School where he played sports and later served in the United States Military. He met his wife in Pine Bluff, Arkansas where she worked as a Registered Nurse. He moved to Tallahassee in 1998 with his wife and only child. He worked for All American Ford as a shuttle driver and later at Wal-mart as a greeter before he retired. Kenneth loved meeting and greeting people, spending time with his family, traveling, taking care of animals, and going to daily Mass, where he attended at Blessed Sacrament Catholic Church. He was a man of faith and always ready to forgive. He liked to laugh and be happy. He was a humble man and lived a simplistic life. On August 19, 2021, Kenneth passed away with his loved ones by his side. Kenneth is survived by his wife, Kamla (Kathy) Henley; daughter, Annmarie Henley-Joyner; son-in-law, Brad Joyner; grandson, Anthony Joyner; granddaughter, Avamarie Joyner; grandson, Joseph Joyner; sister, June Gagen; and brother-in-law, Robert Gagen. He is preceded in death by his mother, Loraine Henley and father, Floyd Henley. Visitation is from 6:30 PM until 8:00 PM, Sunday, August 22, 2021, at Abbey Funeral Home, with a Rosary being said at 7:00 PM. The Funeral Mass is 1:00 PM, Monday, August 23, 2021, at Blessed Sacrament Catholic Church. The online guestbook and live stream Rosary can be found at www.abbeyfh.com.

The family of Mr. Kenneth Ray Henley created this Life Tributes page to make it easy to share your memories.

Send flowers to the Henley family.