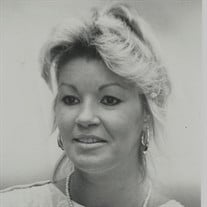 Lethie Marsh Lanham, 66, of Tallahassee, peacefully passed away at home Friday, February 17, 2017, in Tallahassee. Daughter of the late Douglas Hilton Marsh and Sylvia Joan Williams Marsh, who survives, she was born October 24, 1950, in Crites, West Virginia. The family moved to Tallahassee in the early 60’s where Lethie graduated from Leon High School. After graduation she worked at the Florida Department of Transportation, and later the Department of Environmental Protection until retirement. She is also survived by a son, Jason Lee Lanham; brothers, Douglas (Debra) Marsh, Jr., and David (Anne) Marsh; sisters, Christine (Charles) Rabon and Carol Hart; a longtime companion, Neill Wade, all of Tallahassee, a lifelong friend, Iris Corbin of Aurora, CO, as well as numerous nieces, nephews, friends. Lethie loved animals, especially horses and cats, and they loved her. She saved and cared for a feral cat, Rascal, for years, and her most recent feline friend, Sheba, literally opened the door of her home to come inside and become her new friend. She was an accomplished photographer of local scenes and structures, and made trips to Colorado to photograph her beloved wild horses. A service to commemorate her life will be held 12:00 PM, Saturday, February 25, 2017, at Abbey Funeral Home. In lieu of flowers, Lethie has requested that those who wish to honor her memory make donations to the Leon County Humane Society, The Tallahassee Animal Shelter, Triple R Horse Rescue, or Hands And Hearts For Horses. Online condolences can be expressed at www.abbeyfh.com

The family of Mrs. Lethie Marsh Lanham created this Life Tributes page to make it easy to share your memories.

Send flowers to the Lanham family.