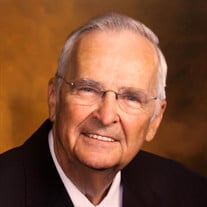 Luther R. Rogers, age 86 and a resident of Tallahassee, Florida since 1977, transitioned to his heavenly home on November 8, 2020. Luther was born in Roopville, Georgia on April 13, 1934, to the late Rev. Luther Guy and Vesta Kent Rogers. He met the love of his life, Betty Jean Arrington, in high school and they were married for almost 65 years. Luther graduated as valedictorian from Heard County High School in Franklin, Georgia, attended Berry College in Rome, Georgia, and earned degrees from West Georgia College in Carrollton, Auburn University and the University of Florida, where he earned both a specialist’s and doctor’s degree in educational administration. His distinguished career in education included serving as a teacher, principal, county staff worker and superintendent in Brevard County, Florida, and in leadership positions for the Florida Department of Education and Florida Association of District School Superintendents in Tallahassee, until his retirement in 2013 at age 79. Luther was also a veteran, having served in the U.S. Army as a translator during the Korean War. Most importantly, Luther was a born-again Christian. He was an active member since 1977 of First Baptist Church, Tallahassee, where he served as a deacon and Sunday School teacher. Luther was a man of faith, generosity and integrity who loved his family and his Lord. He especially enjoyed Southern Gospel quartet music, reading (particularly westerns), working outside, spending time with his wife and other family at the Hemlock Inn in Bryson City, North Carolina and at the family farm in Ridgeway, Georgia, eating peanut butter, and supporting the ministries of the Lighthouse Children’s Home. He is survived by his wife, Betty Arrington Rogers; son, Lance Rogers of Tallahassee, Florida; daughter and son-in-law, Melba and Donnie Jacobs of Tallahassee, Florida; son and daughter-in-law, Doug and Lori Rogers of Pike Road, Alabama; grandchildren, Kyle Rogers (Liza), Trevor Rogers, Anna Jacobs, Katie Jacobs, Bethany Rogers Franklin (Sam), Emilee Rogers and Zack Rogers; great-grandson, Jensen Jacobs; sister, Sara Cutler, Charleston, South Carolina; brother, Ray Rogers (Janie), Rockledge, Florida; and numerous nieces, nephews and cousins. He was preceded in death by infant brother, Kent Rogers; sister, Charlotte Rogers Hester; and brother-in-law, George Carey Hester. If would like to honor Luther with a gift, please consider making a donation in his name to the Lighthouse Children’s Home in Tallahassee or Big Bend Hospice, Inc. The family would like to express their appreciation to Azalea Gardens Assisted Living and Memory Care in Tallahassee for their compassionate care for Luther over the past year. Arrangements are being handled by Abbey Funeral Home and Tallahassee Memory Gardens, 4037 North Monroe Street in Tallahassee. A visitation time will be held Wednesday, November 11, 1-2 p.m. EST at the funeral home, followed by a Celebration of Life Service at 2 p.m., also at the funeral home. A brief graveside service will follow at the adjoining Tallahassee Memory Gardens. Social distancing guidelines and face masks will be in place for all gatherings. For those who are unable to attend in person, the Celebration of Life service at 2 p.m. EST will be livestreamed. Visit www.abbeyfh.com, click on Dr. Luther R. Rogers on the front page, then Photos and Video, then Webcasting Video to view the video live or after the fact.

Luther R. Rogers, age 86 and a resident of Tallahassee, Florida since 1977, transitioned to his heavenly home on November 8, 2020. Luther was born in Roopville, Georgia on April 13, 1934, to the late Rev. Luther Guy and Vesta Kent Rogers.... View Obituary & Service Information

The family of Dr. Luther Rayford Rogers created this Life Tributes page to make it easy to share your memories.

Luther R. Rogers, age 86 and a resident of Tallahassee, Florida...

Send flowers to the Rogers family.