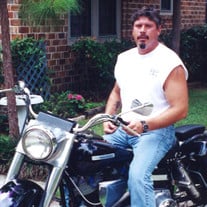 Michael Clark Boydston, 58, affectionately known as “Big Mike” by his friends, passed away on Monday, November 11, 2019, at Tallahassee Memorial HealthCare. The son of Cecil Howard Boydston and Marlene Clark Boydston, he was born on February 5, 1961, in Tallahassee, Florida. Mike was a metal scrapper by profession and had won numerous awards for being top metal scrapper in Tallahassee. Mike was an avid Harley-Davidson/motorcycle enthusiast. He was always a champion for the underdog and he loved all kinds of animals. His family and friends remember him as an endearing, genuine, and authentic individual who was modest, unpretentious, and humble. Mike also had numerous gifts and talents most people would not be aware of unless they knew him well. In addition to his parents, he is survived by his children, David Boydston (companion, Halie Dickinson), Daniel Boydston (companion, Stephanie Spurlock), Andrew Davis (wife, Kassandra Davis), Cody Boydston, and Lia Boydston; numerous grandchildren; and, sister, Georgia Franklin. Also surviving are the many friends he made along his journey. Visitation is from 1:00 until 2:00 PM, Saturday, November 16, 2019, at Abbey Funeral Home, with the funeral beginning at 2:00 PM. Interment follows at Tallahassee Memory Gardens. Online condolences may be expressed at www.abbeyfh.com.

The family of Mr. Michael Clark Boydston created this Life Tributes page to make it easy to share your memories.

Send flowers to the Boydston family.