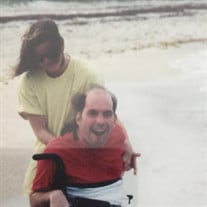 Michael Joseph Maloney passed away on December 22, 2017 at Tallahassee Memorial Hospital. He was the beloved son of Helen and Michael G. Maloney; nephew of Harold and Shirley Hirsch, John Maloney, and Winnifred Coleman, Frank and Joan Madden; spectacular brother to Suzanne Maloney, Jacqueline Knox and Annie Pascucci; brother-in-law and friend to John Pascucci, Glen Knox and Rick Pfielsticker; Uncle to Ryan Maloney, Nathaniel VanUithuizen, Kimberly Brunner, and Christopher Knox. Michael had dear friends in both New York and Florida. In NY these included Mary Joseph, Karen DeChalus, Alison Schnell, Vicki Venduro, Harvey and the communities of Campus View Dr., Burden Lake, The Doane Stuart School, “the CP Center” in Albany, and Sunnyview Hospital. In Florida, Mike’s strongest friendships were with Pamela S. Aveling and family & Adrienne Singleton and family, Darrell Daniels, and the Right Directions, owned by General Bryant. Michael was the bravest soul from the very beginning. He lived his life to the very fullest taking chances and winning despite all the challenges his life presented to him. His influence reached throughout all of our lives and through time to create relationships, push others to value who they were and to go and make great lives for themselves. His optimism, sense of humor and thirst for life, encouraged others to cherish their lives, to complain less and fight for what they wanted. He was an inspiration and a joy to many. He believed he could do anything and did many things no one believed he could. Some of his proudest accomplishments were, becoming a NAUI certified diver, significantly contributing to the development of Florida’s Self-Determination Program, deep sea fishing, and traveling. He was a truly active member of society and a brilliant brother. Probably most remarkably to everyone but Mike, he was a proud, able, Independent Man who lived his life on his own terms, often much to the dismay of his loving family, who learned to trust his sense of destiny. He made a difference in the world and in so many people’s lives. He will be truly and sorely missed. Our pain is only eased by the knowledge that Michael is no longer in pain, no longer bound by the limits of his body, and at peace. Contributions can be made in memory of Michael “Jaws” Maloney to OCEARCH, shark tracking nonprofit http://www.ocearch.org/expeditions/support/ , or to The National Center for Independent Living https://www.ncil.org/ or Consumer Directed Choices in NYS, https://cdchoices.org/. A memorial will be held in Albany, NY at a date to be announced. Online condolences may be expressed at www.abbeyfh.com.

The family of Mr. Michael Joseph Maloney created this Life Tributes page to make it easy to share your memories.

Michael Joseph Maloney passed away on December 22, 2017 at Tallahassee...

Send flowers to the Maloney family.