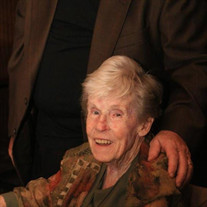 Nita “Sally” Marie Drewyor (nee Ebersole) passed peacefully away on Friday, July 24, 2020, at Azalea Gardens Assisted Living. Nita was a resident of Tallahassee, Florida. Nita was born on February 22, 1925, in Toledo, Ohio. She was the second oldest of eleven children and has survived all but the youngest. She was always proud of the fact she shared the same birthday as George Washington. She married James Richard Drewyor on February 6, 1954, and they remained happily married for over 50 years before his death on August 18, 2011. Nita was a strong-willed woman and remained so until her passing. She enjoyed gardening, taking walks, and in her younger years, was accomplished in pottery, knitting and crochet. Although small of stature, she was a robust and fiery woman. She truly epitomized, “OMG, what is she up to now?” James was an over-the-road truck driver and was gone 5 days a week. Nita raised eight children pretty much on her own. She had an inner strength that could not be broken. She was firmly grounded in her belief in God and knew God guided and protected her through some difficult and trying times. She never lost faith in her Lord and praised him every day for what he had given her. She is survived by her eight children, Mary Lewis (Ray Lewis), James Peraino (Shirley Peraino), Nita “Sally” Carns (Thomas Carns), Michael Peraino (Jan Peraino), Christopher Peraino (Gail Peraino), Esther Diaguila (Paul Diaguila), Lucille Poppell (Jeffrey Poppell) and Susan Evertz (Hans Gerd Evertz); 30 grandchildren; 75 great-grandchildren and 4 great-great-grandchildren. Because of continuing COVID-19 guidelines, the services for Nita will be closed to all but the immediate family. Visitation will begin at 1:00 PM, with the funeral service following at Abby Funeral Home on Tuesday, July 28, 2020 at 2:00 PM. Interment is at Tallahassee Memory Gardens. The funeral service will be available livestream and the online guestbook can be found at www.abbeyfh.com.

The family of Mrs. Nita Marie Drewyor created this Life Tributes page to make it easy to share your memories.

Send flowers to the Drewyor family.