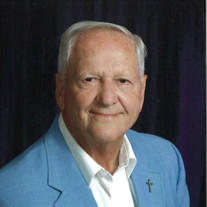 R. D. White, Jr., 82, left this world for his heavenly home on April 16, 2022, after many years of battling dementia. R. D. was born on July 22, 1939, in Tallahassee, Florida to R. D. White, Sr. and Alvine Kelley White. He spent his life in Tallahassee and attended Leon High School, as a young man working in the heating and air conditioning field, then as owner of a service station on the corner of South Monroe Street and Orange Avenue. He served nine years in the National Guard and Army Reserves. After serving in the Auxiliary for two years, R. D. went to work full time as a Deputy Sheriff in Leon County and served for 35 years, beginning in 1967 and retiring in 2002. He served in parts of five decades under five Sheriffs: Bill Joyce, Raymond Hamlin, Ken Katsaris, Eddie Boone and Larry Campbell. He was a member of Bible Believers Fellowship on Highway 20 and a previous member of Seminole Baptist Church. He was a member of the Masons, Jackson Lodge #1 for over 25 years. A charter member of Marzuq Shrine, a member of the Motorcycle Escort and he served as Potentate in 2006. He was also a member of Tallahassee Moose Lodge 1075, joining in 1995 and serving as Governor in 2007-2008. R. D. enjoyed dancing and was a member of Sue Boyd's Rug Cutters in the 1980's. He also enjoyed traveling on bus trips and cruises, favorite trips included Hawaii, Alaska, The Ark in Kentucky and Washington D.C. He was preceded in death by his parents and a brother Ray White. He is survived by his wife of 27 years, Linda White; a brother, Donnie White (Lillian); a sister-in-law, Dorothy White; one son, Robert Keith White; one granddaughter, Brandi Dean (Daniel); and three great-grandchildren. He is also survived by a stepson, Richard Lovern; stepdaughter, Katie Tointigh (Tom, Jr.); and grandson; Jayden Tointigh. Visitation will be from 5:00 PM until 7:00 PM, Monday, April 25, 2022, at Abbey Funeral Home. The funeral service is 11:00 AM, Tuesday, April 26, 2022, at Seminole Baptist Church. He will be laid to rest at Tallahassee Memory Gardens. In lieu of flowers, donations may be made to Bible Believers Fellowship, Seminole Baptist Church, Moose Charities, Shriners Hospital for Children, Florida Sheriff's Youth Ranch or a charity of your choice. Online condolences may be expressed at www.abbeyfh.com.

The family of Mr. R D White Jr. created this Life Tributes page to make it easy to share your memories.

Send flowers to the White family.