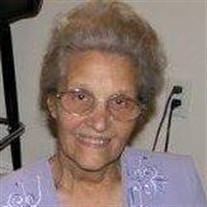 Rena Mae Rednour Adkins (aka: Gammie, Goo and My Bride), 78 years old, of Tallahassee, Florida passed away peacefully Monday, February 29, 2016. She was born May 21, 1937 in Cleveland, Ohio. Her parents were John Biddle Rednour and Sada Willine Rednour-Love. She was a former resident of Cleveland, OH but lived in Tallahassee since 1970. Rena attended the Apostolic Institute in St. Paul, MN and retired from Rose Printing Company in Tallahassee. Her main interest was her relationship with her Savior Jesus Christ and was of the Apostolic Faith. Her greatest joy after her Savior was her family, who all lovingly called her Gammie or Goo. Rena enjoyed teaching Sunday School, reading, crossword puzzles and taking care of her flowers and birds. She was gifted with an amazing genteel nature, was a friend to many, comforted the broken, took care of the needy and mothered anyone who needed love and affection. Her laughter and smile were contagious. The family extends a special thanks to Capital Regional Medical Center and the staff for the tender loving care they provided for Rena. Her father, John Rednour Sr; her mother, Willine Rednour Love; her sister, Joan Gray; her brothers, Charles Rednour; Paul Rednour; James Rednour and David Rednour preceded her in death. Rena is survived by her husband William Adkins, her son Jonathan Adkins and wife Barbara of Tallahassee, FL, her daughter Susan Kerber and husband Bill of Randleman, NC, step-son, Bill Adkins, step-daughters, Kathy Perella and Debbie Busciglio, ten grandchildren and ten great grandchildren, brothers, Glen Rednour of Bean Station, TN, Hal Rednour of Brunswick, Ohio and John B. Rednour, Jr of Havana, FL, sisters, Sallie Hallmark of Tallahassee, FL, Betty Zappa of Belleview, FL and Darlene Golden of Palm Bay, FL. She had two life long friends Shirley Thompson and Joan Marler. Visitation and Funeral Services will be held at Abbey Funeral Home, 4037 N Monroe St, Tallahassee, FL. 32303. Visitation will be Tuesday, March 1, 2016, from 5-7pm. The Funeral Service will be on Wednesday, March 2, 2016 at 11:00am with interment immediately following at Tallahassee Memory Gardens. Online condolences may be conveyed at www.abbeyfh.com.

Rena Mae Rednour Adkins (aka: Gammie, Goo and My Bride), 78 years old, of Tallahassee, Florida passed away peacefully Monday, February 29, 2016. She was born May 21, 1937 in Cleveland, Ohio. Her parents were John Biddle Rednour and Sada Willine... View Obituary & Service Information

The family of Mrs. Rena Mae Adkins created this Life Tributes page to make it easy to share your memories.

Send flowers to the Adkins family.