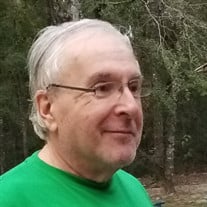 Richard Albert Greene, 66, of Crawfordville, peacefully passed away on Wednesday, February 27, 2019, while in the presence of his loving family. A son of Albert Edward Greene and Angelina Clara Agnes Zambito Greene, of blessed memory, he was born in Boston, Massachusetts on March 26, 1952. Also preceding him in death is a grandson, Nathan Green. Rich had resided in Crawfordville since 2001, having come from the Tampa and Orlando area. Retired since 2016, Rich was formerly a Quality Assurance Software Manager for companies such as Microsoft, and his extraordinarily varied career included working on mental telepathy and astral projection studies in recent decades with the federal government and working with Disney World. He earned a Bachelor’s of Science from Bellevue University in 2006, had earned various certifications, and strived to always continue learning. He was a member of Temple Israel in Tallahassee with a keen interest in the study and teaching of Kabbalah. Rich loved trying to win the lottery and is probably still searching for patterns in the numbers! Self-taught with countless sets of law books, Rich loved to argue the legal establishment. A motivational speaker, he was a healer helping many people in many ways. He conducted workshops throughout the nation teaching people the art of auras, telepathy, self-healing, and life-force energy. A talented musician and rousing singer, he wrote many songs; including a rock opera. He loved being on stage. He also authored four books: The Handbook of Astral Projection, The Handbook of Astral Power, The Magic of Psychic Healing, and The Magic of Past Life Therapy. Richard loved helping people and had an awesome sense of humor; Green Lantern was his idol, and he was perpetually searching for his ring. He was quick to break out a hat or a crazy t-shirt in family gatherings for a laugh. He was such a great story-teller, that any time he started a story, you had to wonder if it was a real story or a ‘Rich-story’. He was a devoted husband and always there for his family and friends. He leaves behind his wife, Abbieann (Misty) Lazarus Greene; stepson, Joel Hammon (wife, Rebecca Green); granddaughters, Harley Hammon, Erin Hammon and Jaime Green; three great-grandchildren; and sisters, Elana Dettore and Geraldine Greene. The funeral will be held at 11:00 AM, Friday, March 8, 2019, at Abbey Funeral Home, with interment following at Tallahassee Memory Gardens. The family will receive friends an hour prior to the funeral. A celebration of life gathering will be at 3:00 PM Friday, March 8, 2019, at 54 Sharonwood Drive, Crawfordville, Florida 32327. In lieu of flowers, memorial donations may be made to Big Bend Hospice. Online condolences may be expressed to the family at www.abbeyfh.com.

Richard Albert Greene, 66, of Crawfordville, peacefully passed away on Wednesday, February 27, 2019, while in the presence of his loving family. A son of Albert Edward Greene and Angelina Clara Agnes Zambito Greene, of blessed memory, he was... View Obituary & Service Information

The family of Mr. Richard Albert Greene created this Life Tributes page to make it easy to share your memories.

Send flowers to the Greene family.