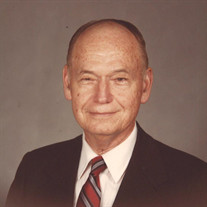 Colonel Robert Carlton Daniel died January 27, 2018. He was 98 years old. Colonel Daniel was born in 1919 in Miami, Florida to Fred A. Daniel and Carrie Emma King Daniel, a pioneering family of six children, all of whom are deceased. Colonel Daniel was educated at Miami public schools, attended University of Miami for two years,then transfered to the University of Florida where he earned a B. S. Degree in Business Administration. He later earned a Master's of Education Administration Degree from Trinity University, San Antonio, Texas. He was drafted into the U.S. Army as a Private in 1942 and retired from the U.S. Air Force twenty years later as a Full Colonel. Colonel Daniel's primary interest while on military duty was hospital development and was well known for participating in building the 50 bed hospital in Bavaria, Germany, the 500 bed hospital in Elmendorf, Alaska, and the 1000 bed Air Force hospital at Lackland Air Force Base San Antionio, Texas. He also served as a consultant to the Air Force Surgeon General while stationed in San Antonio, Texas. After his military retirement, he and his family moved to Tallahassee, his wife's hometown, and started work at Tallahassee Memorial Hospital as the Manager Patient Accounts. He retired twenty years later as the Executive Vice President of the hospital. Colonel Daniel's duties included liaison to the Tallahassee Memorial Medical Staff, Risk Manager, liaison to the TMH Auxiliary, and overseeing hospital operations and development. Colonel Daniel was an active member of the downtown Rotary Club for 40 years. He was a leader at Faith Presbyterian Church, serving as an Elder and as a Deacon. He also was a philanthropist, underwriting the Tallahassee Memorial Golden Gala for many years and was a Life-Time Donor to the Tallahassee Memorial Hospital Foundation. He was an active member at Saint Paul's United Methodist Church at the time of his death. Colonel Daniel is survived by his wife, Ivy Lee Butler of 68 years and two children, Roberta K. Daniel of Tallahassee and Ivy L. Moultrie (Ferrell) of Roswell, Georgia as well as two grandchildren and one great-grandchild. The Daniel family would like to express our appreciation to Sylvia Petrandis, Colonel Daniel's Hopewell RN and Sharon Price, Shelia Staley, Latonya Williams, Vicki McNair, and Talisa Banks, Colonel Daniel's permanent caregivers and all other caregivers with Hopewell In-Home Senior Care who have contributed to his wonderful and compassionate care. The Daniel family also would like to express our appreciation to the staff of Big Bend Hospice, especially Colonel Daniel's Hospice RN, Brenda Murphy, for outstanding care and compassionate support. Funeral Services will be held at Abbey Funeral Home on Sunday, February 4, 2018 at 3:00 PM. Viewing will be held on Saturday, February 3, 2018 from 4:00 until 6:00 PM, at Abbey Funeral Home. Entombment will be at Tallahassee Memory Gardens. Online condolences may be expressed at www.abbeyfh.com.

Colonel Robert Carlton Daniel died January 27, 2018. He was 98 years old. Colonel Daniel was born in 1919 in Miami, Florida to Fred A. Daniel and Carrie Emma King Daniel, a pioneering family of six children, all of whom are deceased. Colonel... View Obituary & Service Information

The family of Colonel Robert Carlton Daniel USAF, Ret. created this Life Tributes page to make it easy to share your memories.

Send flowers to the Daniel family.