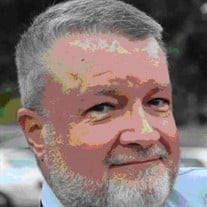 Born in Nashville, grew up in Key West, Tallahassee resident since college, Robert Young Fernandez Jr. transitioned to his heavenly home on Tuesday, December 15, 2020. Robert was born on December 25, 1952, to Robert Young Fernandez Sr. and Dorothy Betty Jean Marshall Fernandez. Growing up in Key West, Robert loved the ocean, and all it had to offer. Whether it was fishing, lobstering, or his favorite pastime, preparing and eating all the little delicious creatures that live in it, Robert enjoyed every minute he spent on the water. But it was the passion he discovered in 8th grade that was life changing for him: music. Robert loved music. He dedicated himself to understanding the craft and was elected as the captain of the Key West High School band in his senior year. In that very same band, Robert found himself smitten with more than just the notes on the page; he looked from behind that tenor saxophone sheet music and saw Susan Joan Higgins just a few feet away holding her clarinet. Robert swore Susan made “eyes” at him, and that’s what caught his attention. It is that kind of banter that kept Robert and Susan laughing together for nearly 50 years. And from those years together, the couple raised four children who were all musicians as well. While Robert was a successful contractor, he rarely focused on the accumulation of financial wealth or community accolades. His family, friends, and his service to Tres Dias drew his attention. Robert made everyone feel special, was generous with his time, and always had an encouraging message or even a joke ready if anyone was having a bad day. He had a knack for making each person feel like he or she were the priority. Whether it was spending 3 months to plan a 3-day Tres Dias weekend or his mission trips to Haiti and Costa Rica, Robert truly had a servant’s heart. He was not a man that spent much time basking in the praises from others, but he celebrated each time one of his children was recognized with an honor. When his oldest daughter, Janene, graduated with an A.A. degree in paralegal studies and a B.S. degree in Elementary Education, Robert was in the front row cheering her on. When his oldest son, Jamie, was pinned as an Air Force reserve Colonel and landed a position as a Department of Defense civil servant working in space launch and acquisition, Robert took more pictures of the event than any other attendee. When Robert’s second son, Matt, was elected as the Wakulla High School Teacher of the Year, Robert smiled with pride and gave him great advice. And when his youngest daughter, Nikki, graduated with her master’s degree from the University of Florida, Robert, a lifelong Florida Seminole Alumnus and former Marching Chief, became a Florida gator for the day just to support his daughter. One could spend hours discussing Robert’s abilities as a youth sports coach, his ability to fix anything or his “green thumb.” However, Robert would quickly divert the conversation to something more important to him: his family. Robert is survived by his wife of 46 years, Susan; daughters: Janene [Steve] and Nikki [Marcus]; sons: Jamie [Jess] and Matt [Meredith]; grandsons: Josh [Kelsey], Luke, and Noah; granddaughters: Callie, Jordan, Randi, and Naomi; great-grandson: Lincoln and great-granddaughter: Scarlett; two brothers: Tony and Frank, one sister: Mary-Jane; mother-in-law: Sally; three brothers-in-law: Billy, Scott and Mark; three sisters-in-law: Pam, Sharon and Holly; and a host of nieces, nephews, cousins, aunts and uncles. Please join us in a celebration of life for Robert on Sunday, December 27th at 3:30pm. Though he left us too soon, we are comforted by the knowledge that he is resting eternally with Christ. The memorial service will be held at All Nations Tallahassee Church at 2820 Sharer Road Tallahassee, Florida 32312. There will be a live Facebook stream as well. All are invited to attend the in-person event using appropriate CDC guidelines. In lieu of flowers, the Family respectfully requests that contributions to support missions work in Robert’s memory be made to: All Nations Tallahassee Church C/O Pastor Steve Dow 2820 Sharer Road Tallahassee, Florida 32312

The family of Mr. Robert Young Fernandez Jr. created this Life Tributes page to make it easy to share your memories.

Born in Nashville, grew up in Key West, Tallahassee resident...

Send flowers to the Fernandez family.