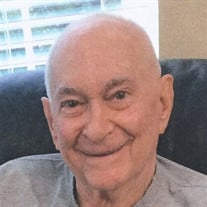 Robert Don Holt, 88, of Tallahassee, went to be with his Lord and Savior on Monday, November 11, 2019, while surrounded by his loving family. He was born in Hope, Arkansas, on August 7, 1931, to the late Psellus Jacques “P.J.” and Emma Frances Ward Holt. Married his bride Beverlye in 1953 and enjoyed 66 years of marriage. In addition to his parents, he is preceded in death by his son, Timothy Jacques “Tim” Holt and his sister, “Jackie” McMahen. A veteran of the United States Navy, he served his country with honor during the Korean War. Following his military service, he graduated from the University of Florida as a pharmacist and owned Dalton’s Drug Store. In later years, he enjoyed serving the students as the “Gator”pharmacist at FSU’s Thagard Health Center. A faithful member of First Baptist Church, he was a true family man and never met a stranger. He enjoyed his sports and as an avid volleyball player, he was still on the court at age 75. He had a real knack for coaching and had previously coached his daughters’ and granddaughters’ volleyball and softball teams. As a result, he earned the nickname “Coach Poppa.” Survivors include his wife of 66 years, Beverlye Ann Vining Holt; children, Teresa Ann “Tere” Holt (Tommy) Tucker, Emily Sue Holt (Pat) Brown and Carol Jean Holt Ham; grandchildren, Sondra (Tray) Brittle, Amber Lynn (Nick) Sroka, Brian Robert Ham, Jason Ward Ham and David Mathias Ham; great-grandchildren, Morgan Leah Brittle, Karsyn Elizabeth Brittle, Carter William Sroka, Oliver Wright Sroka and Leine Mae Sroka. The family will receive friends Monday, November 18 for visitation from 10:00 until 11:00 AM in the sanctuary of First Baptist Church, Tallahassee, with the funeral service beginning at 11:00 AM. Interment follows at 1:00 PM at Tallahassee National Cemetery. Memorials may be made to the International Mission Board of the Southern Baptist Convention or Big Bend Hospice. Online condolences may be expressed at www.abbeyfh.com.

The family of Mr. Robert Don Holt created this Life Tributes page to make it easy to share your memories.

Robert Don Holt, 88, of Tallahassee, went to be with his Lord...

Send flowers to the Holt family.