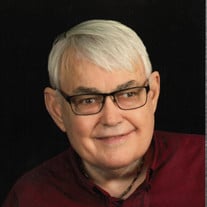 Robert Hugh McTague, Jr., 80, of Tallahassee, lived a full and productive life and passed peacefully into eternal life on Monday, January 18, 2021, with family at bedside. He is preceded in death by his grandson, Edward McTague Carte; son, Robert Hugh McTague, III; and sister, Lucia Mary McTague. He is survived by his wife of 55 years, Doris M. McTague; daughter, Mary M. Carte; granddaughters, Christina, Emma, and Tara; brother, Neil (Patty) McTague; daughter-in-law, Sylvia; and niece Lauren. Son of Robert Hugh McTague, Sr. and Mary Cotter McTague, of blessed memory, Robert Jr. was born in New York City, New York on April 26, 1940, and grew up in Miami, Florida. He was a man of great service to his family, his church, and to his community, evident in how he lived his life. Early on, he was engaged with Red Cross as a swimming instructor for young children to prevent drowning. Upon completion at St. Theresa’s High School in 1958, he began his post-secondary education at the University of Florida. After honorably serving in both the United States Army and Air Force, he earned his Bachelor’s and Master’s of Social Work from FSU. In 1965, he married his wife, Doris, and the couple had two beautiful children. In 1969, Robert moved to Tallahassee with his young family and became a parishioner at St. Thomas More. He was deeply engaged with his church and greater community. He was an active member of his parish, serving as lector, usher, and occasionally as altar server and also participated in Worldwide Marriage Encounter and Family Weekend. In his community, he was widely recognized for the mentorship and counseling he offered as a Social worker as well as his achievement as Distinguished Toastmaster. Above all, however, Robert cared deeply for his family; amongst countless memories are his years coaching both his children’s softball and baseball teams from t-ball on. In later years, he attended several adult religious classes at the church and focused faithfully on his intercessory prayers. He would always include more people and needs and once you were on his prayer list, it was permanent. He was also known for praying for those who had no one to pray for them, a testimony of his faith and love for humanity. We take deep comfort in knowing he continues to pray for us all, from heaven. His Funeral Mass will be held at Good Shepherd Catholic Church on Saturday, January 23, 2021, at 11:00am, with interment at Tallahassee Memory Gardens. The mass will also be available on live stream at https://goodshepherdparish.org/livestream. In lieu of flowers, the family asks for donations made to Catholic Charities or Second Harvest of the Big Bend. We are also asking anyone who knew Robert to send their memories in photos, videos, or words of kindness, as a form of paying their respects, to [email protected]

Robert Hugh McTague, Jr., 80, of Tallahassee, lived a full and productive life and passed peacefully into eternal life on Monday, January 18, 2021, with family at bedside. He is preceded in death by his grandson, Edward McTague Carte; son,... View Obituary & Service Information

The family of Mr. Robert Hugh McTague Jr. created this Life Tributes page to make it easy to share your memories.

Send flowers to the McTague family.