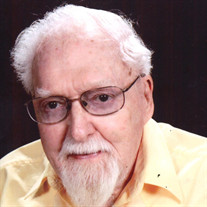 Robert “Bob” J. Schmidt, 94, a long-time resident of Tallahassee, peacefully passed into God’s loving arms on Sunday, September 2, 2018 surrounded by his family. He was known by many names, such as Bob, Husband, Son, Brother, Dad, Grandad, Great Granddad, Sweet Ole Bob (SOB) and Boots to name a few. He was son of the late Dennis and Emily Shinton Schmidt, and was born in Midland, Pennsylvania on April 10, 1924. He is preceded in death by his wife of 52 years, Therese-Ann Sprenger Schmidt; son Paul David Schmidt; daughter, Suzanne Margaret Schmidt Peters; brother, Dennis Schmidt; and sister, Dorothy Schmidt Allison. He served as a district manager for an insurance company and then went to work the State of Florida Department of Revenue as an Analyst. Bob was a devout Christian, a member of St. Louis Catholic Church and Knights of Columbus. He faithfully served his country in the United States Army during World War II, where he helped preserve our nation’s freedom, and the freedoms of many nations around the world by setting explosives on Normandy’s shores prior to the D-Day invasion. In December 2016 the French Government awarded him with their country’s highest honor, the Legion of Honor presented to him by the French Consulate at ceremony in St. Augustine Florida. Bob was passionate about Boy Scouting and devoted sixty-four years to the organization. Fifteen of those years he served as Scout Master for Troop #118 mentoring over 500 boy scouts during his tenure. Thirty-four boys under his guidance attained the rank of Eagle Scout, two of which were his sons and one grandson. Additionally, by his example and leadership, multitudes of scouts have become leaders in scouting and the community as well. Boy Scouts of America honored him with their highest honor, the Silver Beaver Award. He loved to occupy his time doing woodworking, making jewelry, and donating time and effort to an array of charitable organizations. Bob loved the Florida State Seminoles. He was a fixture at football, baseball, basketball, and various other FSU sporting events including women’s volleyball and softball, anything as long as it was Florida State Seminoles. Survivors include his children, Dennis J. Schmidt (Cheryl), Penny Scruggs (Jerry), Larry Schmidt (Brenda), Chris Kimmons (Bill), Doug T. Schmidt (Lorretta), Martha Crow (Mike), Chuck Schmidt (Robin), Mary K. Parker (Dennis), Ann Marie Ivester (Terry), Pat Schmidt (Sandy), Mike Schmidt (Flo), Dorothy Gochanauer (Sam), Jimmy Schmidt (Connie) in addition to thirty-five grandchildren, thirty-eight great-grandchildren, and six great-great-grandchildren. His legacy continues through his children, grandchildren, and his FSU & Scouting families. There will be a Rosary at 5:30 PM, Friday, September 7, at Abbey Funeral Home, with visitation to follow until 7:30 PM. A Christian Burial Mass will be at 10:00 AM, Saturday, September 8 at Saint Louis Catholic Church, interment will follow at Tallahassee Memory Gardens. In lieu of flowers, memorial donations may be made to either Saint Louis Catholic Church or Boy Scouts of America. Online condolences may be expressed at www.abbeyfh.com.

The family of Mr. Robert J. Schmidt created this Life Tributes page to make it easy to share your memories.

Send flowers to the Schmidt family.