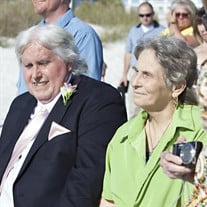 Ronald W. Scott, DC, 72, beloved husband and father, well-respected chiropractor, and longtime resident in Miami, FL, passed away on Wednesday, November 30, 2016, at South Miami Hospital. Born in Rochester, NY to Dr. Roger Hubbard Scott and Jessie Ione Dildine/Scott, Ron graduated from Logan College of Chiropractic in St Louis, MO with a Doctor of Chiropractic degree January 27, 1967. While in St Louis, MO he met his wife of 49 years, Diana Lee Johnson/Scott of Kansas City, MO, who passed away on 1/24/16. They married on November 19, 1966 in Kansas City, MO and moved to Rochester, NY in 1967 and eventually moved to Miami, FL in 1969 when Ron became licensed. Ron then began practicing chiropractic care shortly after moving to Miami where he continued until retiring in 2014. Ron was also a founding business partner of Quality Management Health Care, a member of the International College of Chiropractors, a member of Dade County Chiropractic Society where he served as the President, and a member of the Florida Chiropractic Association (FCA) where he served as President in 1983 and as a Board of Directors member for several years. Ron was also very involved in the community; he was a member of Cutler Ridge United Methodist Church, and a member of the Perrine Kiwanis Club where he also served as President. Diana, born in Lawrence, WA to Dr. William Conrad Johnson and Shirley Joy Turkington/Johnson, graduated in 1966 from Missouri Baptist School of Nursing in St. Louis, MO with a nursing degree. In Rochester, Diana began working at the premature nursery at St. Mary’s Hospital. After moving to Miami, Diana began working at Mercy Hospital as a registered nurse. Later she worked for Dr. Applebaum, M.D., ObGyn. She also taught natural childbirth classes in the mid 70’s. Thereafter, she worked for the State of Florida at the Dade County Health Department as a public health nurse. Ron and Diana are survived by two sons, Loren Gregory Scott and Aaron David Scott and three grandchildren. Ron is survived by four siblings: Janette, Richard, Roger and Robert. Diana is survived by three siblings: Sandy, Jim, and Sheryl. Graveside services are 11:00 AM, Friday, December 16, 2016, at Tallahassee Memory Gardens. Online condolences may be made at www.abbeyfh.com.

The family of Dr. Ronald W. and Diana Lee W. Scott created this Life Tributes page to make it easy to share your memories.

Send flowers to the Scott family.