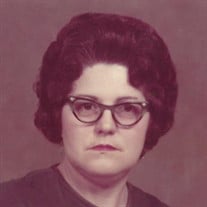 Sarah Elizabeth “Aunt Liz” Collinsworth, 86, of Tallahassee, passed away on Sunday, May 28, 2018. A daughter of the late Daniel and Lennie Sowell Grice, she was born on February 16, 1932, in Panama City, Florida. In addition to her parents, she is preceded in death by a son; Jed Collinsworth; granddaughter, Rachel Cooper; and brothers, Daniel Grice and Jessie Grice. She owned and operated her own daycare. An active and faithful member of Seminole Baptist Church, she was known to always be smiling and also deeply loved her family and anybody she met. She is survived by her husband, Tom Collinsworth, Jr.; daughters, Jan Crosby Green; Paula Joyner (husband, Jim), Pauline Cooper (husband, Bryan); grandchildren, Victoria Cooper and Priscilla Burdeshaw; and great-grandchildren, Travis Cooper and Noah Cooper. Also surviving are sisters, Mavis Parks and Mildred Jackson. The funeral is 2:30 PM, Saturday, June 2, 2018, at Abbey Funeral Home, with the family receiving friends an hour prior to the funeral. Interment is at Tallahassee Memory Gardens. Online condolences may be expressed at www.abbeyfh.com.

The family of Mrs. Sarah Elizabeth Collinsworth created this Life Tributes page to make it easy to share your memories.

Send flowers to the Collinsworth family.